Trip of the Italian Boyfriends 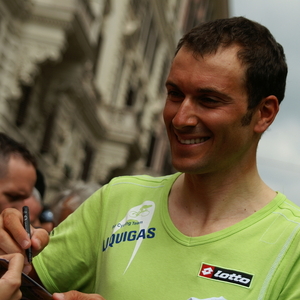 You may remember my gushing over being able to attend the final home game of Paolo Maldini, the legendary longtime captain of my beloved A.C. Milan. It was, if I’m completely honest (which I always am – ahem), one of the main reasons behind me wanting to come to Italy when I did this time. Well, I got lucky in that I got to see not just one but my two favorite sports during this trip – after the soccer game in Milan I was in Rome for the final stage of the 2009 Giro d’Italia, Italy’s biggest bike race.
I don’t want to overwhelm those of you who aren’t cycling fans, but I had a grand time. Part of that was due to the fact that I hung out by one particular team bus for a few hours waiting for my favorite cyclist to appear… Which he finally did. My trigger-finger was ready, and I snapped lots of photos of him. Then, at one point when he actually got so close that my camera refused to even focus on him anymore, I even reached out and touched his hand as he was signing autographs.
Yes, I am that much of a girlish groupie. (But don’t worry, I did actually wash my hand later that day.) 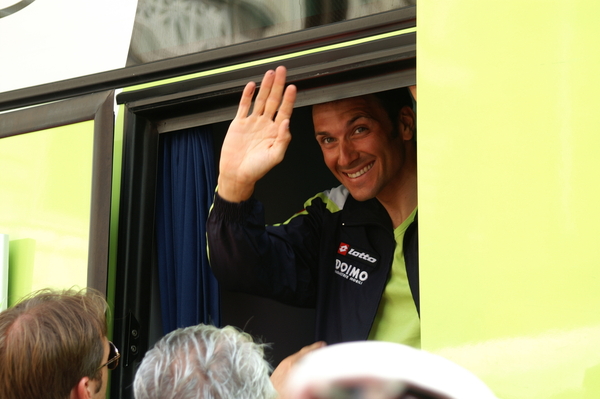 But here’s the thing… On this site, I’ve waxed poetic more than once about my favorite Italian footballers, including the one the husband refers to as my “boyfriend,” but I haven’t talked much about the fact that I had an Italian “boyfriend” long before I was even paying attention to soccer. As I’ve been watching professional cycling over the last 10+ years, there was one Italian cyclist who eventually became my favorite – so much so that the husband started the whole “my boyfriend” moniker back then for him, not for my soccer player.
That cyclist? Ivan Basso. The cyclist whose picture I was taking and whose hand I touched? Ivan Basso. 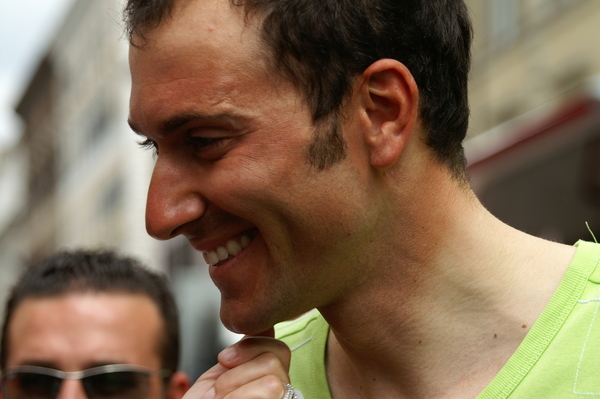 Now that I’m nearing the end of my trip, I’m thinking I might have to dub this trip “The Trip of the Italian Boyfriends.” First I got to see yet another game where my soccer boyfriend, Andrea Pirlo, played – and this time he even took off his shirt afterward, and I’d cleverly brought my zoom lens. Then I got to see my longtime cycling boyfriend, Ivan Basso, up close and personal.
Really, it’s been a very good trip.
And really, I have a very tolerant husband (grazie, caro).
>> You can see my collection of pictures from the finish of the Giro d’Italia in Rome, if you’re a cycling fan & these few pictures of Ivan aren’t enough for you!
all photos by Jessica Spiegel & may not be used without permission