Videos of Flooding in Rome 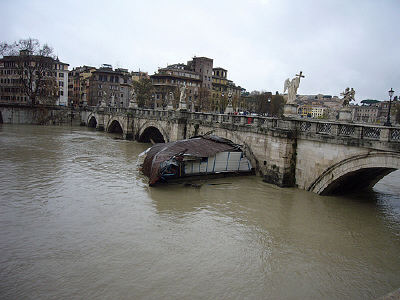 If you’re paying attention to the weather reports coming out of Italy these days, you might think the end of days was right around the corner. Yes, Venice routinely floods every winter, but this year the water reached a level that hasn’t been seen in 20 years. And this year, the Italian capital of Rome was hit by such torrential rainfall that the Tiber River, which runs through Rome, rose more than 16 meters in the space of a week. Some of the videos people have posted from Rome have been amazing – here’s a selection of the videos out there, and be sure to keep an eye on things like treetops coming out of the top of the river and the seemingly really short bridges.

Even if you don’t speak Italian, the images of a very wet Rome in this news story are worth watching.

So far, one death has been blamed on the flooding – a woman was trapped in her car in an underpass which filled with water. This video is of the fire department team recovering the car. (Don’t worry, there are no shots of a dead body.)

This video shows a barge being swept down the river & colliding with a bridge.

Here’s video taken from a helicopter flying over the city.

This video was taken at night, giving the high river an even more eerie quality.

It’s not raining in this video, but you can see the effects of all the previous rain.

Yes, there’s an island under all that water.

For more stories on the flooding in Rome, and some pictures besides, check out:

original photo at the top by Zingaro, I am a gipsy too.