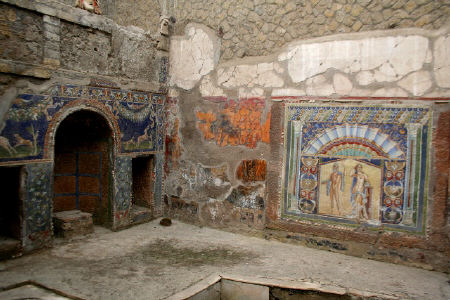 Herculaneum (Ercolano in Italian) is decidedly less famous than nearby Pompeii, although it makes for an equally interesting (some would say even more interesting) visit from the tourist’s perspective. This Roman town, significantly smaller than Pompeii, was once a seaside resort and trading port town with quite wealthy inhabitants.

>> For a more complete historic picture, be sure to read this Herculaneum history

What makes it arguably more interesting to visit today is its smaller size (easier to see the whole thing in a few hours), and its incredibly well-preserved ruins (the town’s destruction was caused by different volcanic debris than Pompeii, and Herculaneum was better preserved). In fact, Herculaneum remains less fully excavated than Pompeii. Pompeii was an easier site to work on for archaeologists when the sites were discovered in the early 1700s, so much of Herculaneum is still being uncovered today.

One of the treasures of Herculaneum is its library at the Villa of the Papyri, which, because of the way the ash and mud from Mount Vesuvius hit the town, is the only library of the time to survive. The scrolls which once filled the library’s shelves are now stores in the National Library in Naples. The vast majority of them are, sadly, quite damaged – but some have been unrolled and scanned.

What to See at Herculaneum 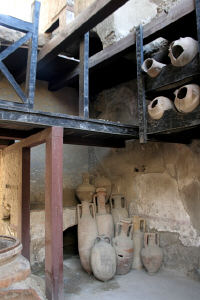 At Herculaneum, follow the path towards the Audio Guide Kiosk and turn left into a long tunnel that takes you to what was once the town beach, keeping in mind that Herculaneum was buried under nearly 60 feet of boiling mud. From this vantage point you can clearly appreciate the extent to which the town was annihilated.

In the 1980s hundreds of bodies were uncovered between the arches tucked into the town walls (boat storage areas) and the wall of volcanic stone the entrance tunnel buries through. It is believed that people fleeing the city huddled here in the hopes the arches would provide protection from the volcano.

Don’t miss the Roman baths. Under the steps you took to descend into the baths notice original wood charred during the disaster.

The House of Deer (Casa dei Cervi) is named for the statues of deer being attacked by dogs in the courtyard. The original statues are now housed in the Archaeological Museum in Naples.

Walking shoes, or those with low heels, are highly recommended. In addition, in warmer weather you may want to bring your own bottle of water. For those with much younger children I advise a backpack style carrier if your stroller is not heavy duty and up to the ancient Roman roads. Allow 2-3 hours to tour the site.

Tickets
Single ticket: €11, valid for 1 day
Access to 5 sites (Herculaneum, Pompeii, Oplontis, Stabiae, Boscoreale): €20, valid for 3 days
>> ArteCard holders enter for free or with a 50% discount, depending on the type of card purchased. Visit the ArteCard website for more details.

How to Get to Herculaneum