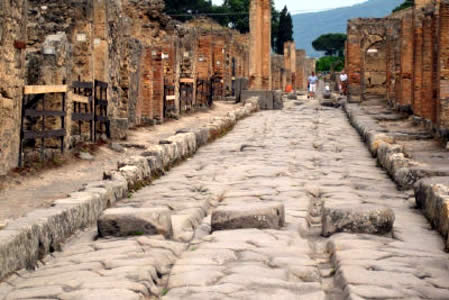 August 24th 79 AD changed the lives of the Pompeians forever. Despite what we now recognize as early-warning signs for an impending eruption of Mount Vesuvius, the 20,000 people who lived in Pompeii had long ago stopped thinking of the mountain as a volcano and so continued about their daily business.

>> For a more complete historic picture, be sure to read this Pompeii history

Today, Pompeii is one of the most popular tourist attractions in Italy, and with good reason. Although much of the city was destroyed by the nearby volcano, it was also largely preserved by being buried under more than 60 feet of ash and pumice, sealing history away until it was discovered in the mid-1700s.

The city of Pompeii dates back to the 8th century B.C.E. when it was initially founded, and the archaeological site (which is also a UNESCO World Heritage Site) reveals its many treasures to visitors to this day. The many preserved frescoes are of particular interest, although the massive influx of tourists every year has caused some level of deterioration at the site. The organization which runs Pompeii now actively encourages people to visit the other nearby sites which were also preserved by the same volcanic blast – among them Herculaneum and Stabiae – in order to lessen the pressure on Pompeii itself.

Some people consider Herculaneum to be a better site to visit, primarily because it’s less bombarded with tourists, it’s smaller and can therefore be taken in more completely in a few hours, and it’s more open than Pompeii. Much of Pompeii, although excavated, remains closed to visitors, while most of Herculaneum’s excavated buildings and structures are visible to tourists.

Do note that although the big attraction here is Pompeii, there is a town not far from the archaeological site called Pompei, spelled with one “i,” which is a living, breathing Italian town. If you were wondering why some signs have the one-i spelling, now you know the answer.

What to See at Pompeii 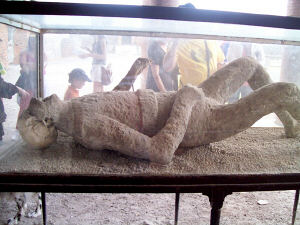 In Pompeii it’s best to enter through the main Porta Marina entrance. Notice the two openings in the gate – the larger one was for chariots, whereas pedestrians used the smaller opening.

Do not miss the forum (foro); the commercial, religious, and political center stands at the intersection of the city’s two main streets. Behind the grassy square Vesuvius looms menacingly.

In a courtyard alongside the forum stand glass-encased casts of volcano victims. Archaeologists in the late 1800s made these by pouring liquid plaster into hollow cavities they detected underfoot.

On the street stepping stones with grooves cut through them for carts to pass through kept Pompeians’ feet from getting wet and soiled during heavy rainfalls.

At the House of the Tragic Poet (Casa del Poeta Tragico), notice the famous “Beware of Dog” (Cave Canum) mosaic in the entryway. If you think your home needs something similar, replica tiles are sold at almost every souvenir stand.

>> And to see even more of what was uncovered and removed from Pompeii, be sure to stop at the National Archaeological Museum in Naples. 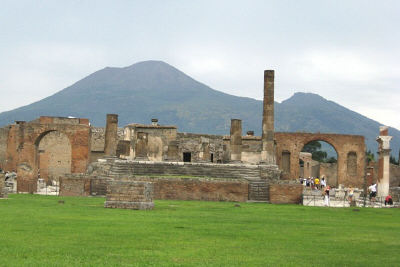 Your ticket price includes a map and small pocket guide, A Brief Guide to Pompeii. This book is excellent and will lead you, number by number through the major not-to-be missed sites of Pompeii with clarity and a bit of humor.

Audio guides are available, but are nothing more than a recording of this book.

>> Read more about my experience with “Pompeii’s Little Red Book,” the self-guided tour, from my most recent visit to Pompeii, too.

You also have the option of hiring a guide on the spot (if you have not already pre-booked). The going rate ranges from €100-115 (depending on the season). Often times individuals will pair up to form a group and split the cost. If you notice there are a lot of guides hanging around, offer less.

Note that the quality of the guides varies, so you’re taking your chances.

>> A printable walking guide from Rick Steves can be accessed here.

Walking shoes, or those with low heels, are highly recommended. In warmer weather you may want to bring your own bottle of water. There is a left luggage desk near the Porta Marina gate where I have stored strollers. For those with much younger children I advise a backpack style carrier if your stroller is not heavy duty and up to the ancient Roman roads.

By allowing 3-4 hours you will not feel rushed and will have an opportunity to steal some quiet moments.

Before You Visit Pompeii: What to Read & See

For the flight over, pick up the International bestseller Pompeii: A Novel by Robert Harris. It is a fast and fun read about a Roman engineer rushing to repair an aqueduct near Vesuvius in the final days before the fatal eruption. An intriguing plot thick with period details moves the story quickly without bogging you down in historical minutiae.

Before leaving town watch the docu-drama Pompeii: The Last Day (2004) from BBC Warner. Using archeological evidence (including the writings of one survivor), the film unravels the mystery surrounding Pompeii’s final hours. This is a great way to get kids interested in an upcoming trip, too.

>> And now, don’t forget to take a virtual walk through Pompeii’s ruins with Google Street View!

Pompeii Ticket Info
Single ticket: €11, valid for 1 day
Access to 5 sites (Herculaneum, Pompeii, Oplontis, Stabiae, Boscoreale): €20, valid for 3 days
>> ArteCard holders enter for free or with a 50% discount, depending on the type of card purchased. Visit the ArteCard website for more details.

Sogno Pompei (Pompeii Dream) – Travel back in time two millennia, to the days just before the eruption of Mount Vesuvius. Lights, sounds, and smells bring to life the mystery of ancient Pompeii.

How to Get to Pompeii