Aperitivo in Italy: How to Eat for Free (Kind Of) 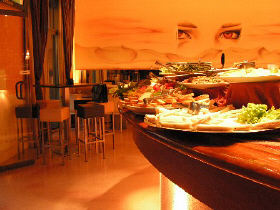 The concept of “Happy Hour” might not seem very Italian, and in fact it’s not – but it’s an idea that’s catching on in some of Italy’s bigger cities in the form of something the Italians call “Aperitivo,” and it’s an excellent way to absorb some of the local scene while eating on the cheap at the same time. Aperitivo in Italy seems to be most prevalent in cities like Milan and Turin, but I saw it advertised in Rome and Florence as well, so I think it’s spreading.

Aperitivo in Italy (also sometimes called Happy Hour, with the Hs being silent – like “Appy Our”) is where you buy your drinks and then you get to go through that place’s buffet line as many times as you want. Yes, the drinks are more expensive, but if you’re going out for cocktails anyway and you’re getting dinner thrown into the deal, you can definitely come out ahead. The food can vary from a few prettily-arranged baskets of pretzels, potato chips and bite-sized cuts of pizza or focaccia to a huge spread including pastas, finger sandwiches, vegetables, salads and even desserts later in the night. Literally, for the cost of one drink (wine, beer, or cocktail) it’s an all-you-can-eat extravaganza. This can be a great thing if you’re traveling on a budget. Plus, if the cafe/bar offers a good aperitivo, it’s likely that it’s a popular place for local residents as well – so you’ll get to soak up a bit of the local scene, maybe watch a sporting event on a big-screen, and just hang out for a couple hours over a nice drink and great selection of “free” food.

As you’re walking around in Italy, check the signs on cafes and bars to see if they advertise a “Happy Hour” or “Aperitivo,” and then swing by later to check them out. When you find the one that has the nicest-looking food, pop in, have a drink, grab a plate and go through the buffet line. Then go through again. Order another drink if you like (usually the first round is the most expensive by quite a bit, so it gets cheaper by the second drink), and go through the line again. Pretty soon, you’ve had a great dinner and one or two great drinks for between €10-15 (depending). Then, if you’re still hungry – or thirsty – instead of a pub crawl, do the Aperitivo Amble!

Milan seems to have the highest proportion of aperitivo locations per capita, and Milano Tonight has a long list of them – with star ratings so you can know before you go.