Best Rome Gelato Shops (Besides the "Eat Pray Love" One) 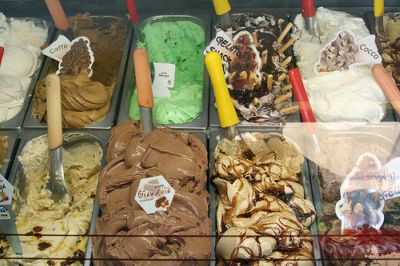 By now, many Italophiles have devoured both the “Eat Pray Love” book and the movie, and you probably won’t be surprised to learn that any place mentioned specifically in the book is currently being mobbed by people attempting to trace author Elizabeth Gilbert’s path.
What this means is that the Rome gelateria that Gilbert swoons over in the book (and Julia Roberts swoons over in the movie), San Crispino, is even more of a zoo than it used to be.
See, long before Gilbert’s book and the subsequent movie came along, Il Gelato di San Crispino was already regarded as one of the top gelato shops in Rome. It was routinely incredibly busy, especially during the high season. Nevermind that there are a few San Crispino locations in Rome – the one featured in “Eat Pray Love” is the one everyone’s flocking to now.
So what’s a gelato-lover in Rome to do? That’s easy, actually – go to one of the other fantastic gelato shops in Rome.
If your goal when visiting Rome is to eat in the exact same shop that Gilbert and Roberts did, then you’re stuck waiting in the line at San Crispino. But if your goal is simply to enjoy some of Rome’s best gelato – no matter who ate there – then this is the list for you.
>> There’s a Google map toward the bottom of this post featuring all the gelato shops listed below, but you’ll have to zoom out a bit to see all the places on the map. 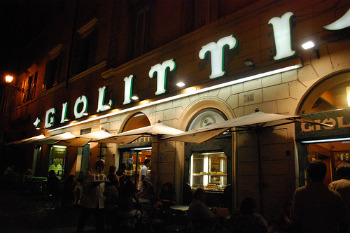 If the person you’re asking doesn’t think San Crispino is Rome’s best gelato, then it’s likely they think Giolitti is. This legendary gelateria has been around since 1900, and has a second location in the EUR district of Rome as well. To sample the wares at the historic shop, you’ll need to visit the Via Uffici del Vicario location – but to sample the same gelato with perhaps less of a crowd, you might want to venture to the EUR. Giolitti today is run by the 3rd generation of the family that started the shop, and it’s still a hallmark of everything that gelato should be. Because it’s not far from major landmarks in Rome like the Trevi Fountain and Pantheon, it’s also easy to swing by the famous gelateria.
Fior di Luna
Via della Lungaretta 96
On one of my recent trips to Rome, I specifically looked through the Rome section of my friend Sara’s Tour del Gelato for gelato I might try. While walking through the Trastevere neighborhood, I sought out Fior di Luna – and I’m glad I did. The tiny gelateria is understated and serves up excellent quality gelato using only the best ingredients. In fact, as Sara notes in her review, they won’t even serve their gelato in cones because they can’t control the quality.
Della Palma
Via della Maddalena 20/23
Another shop that’s not far from the Pantheon and Trevi Fountain is Della Palma, but if you think you’ll skip the line at Giolitti and avoid a crowd at Della Palma – think again. This brightly-colored shop has also long been popular with tourists, and it lures in even those who’ve never heard of it with its enormous selection of gelato. There is case after case of gelato – there’s so much, in fact, that I recommend you scope out your flavor choices before pre-paying at the register so you don’t cause the guys behind the counter angst as you agonize over a decision and the line gets longer.
Gelateria del Teatro
Via di San Simone 70
Despite not being far from a few tourist attractions in Rome, the Gelateria del Teatro isn’t as much of a magnet as some of the other places on this list. That may be due in part to the fact that it’s at the end of a dead-end alley, so you really have to be making a conscious choice to go there – but you’re rewarded if you make that choice. There are both standard and more adventurous flavors available, and – as is a more modern trend – there are even gluten-free cones for the wheat-intolerant and some vegan/dairy-free flavors of gelato.
Gelateria Duse
Via Eleonora Duse 1/e 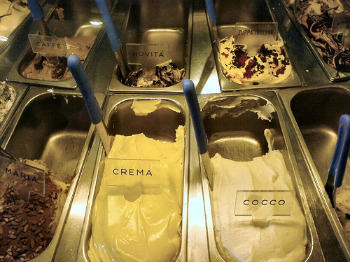 To really get away from the more crowded gelato shops, you’ve got to get away from the crowds altogether. In a more residential area north of Rome’s historic center is the Gelateria Duse, near the vast park surrounding the Villa Alda. It’s popular with locals, and still may be abuzz with activity during the summer, but you’re not likely to see many other tourists here. You’re also not likely to see much in the way of experimental flavors, but that’s not necessarily a bad thing. Incidentally, Duse is also a typical Italian bar, serving non-gelato snacks and coffee as well.
Cremeria Monteforte
Via della Rotonda 22
Despite the fact that Cremeria Monteforte is right behind the Pantheon – and therefore in plain sight to all the people snapping photos of the famous monument – it somehow flies under the radar more so than the other (much larger) gelato shops in the area. This isn’t to say it’s not also going to have a line in the high season, but you may not find as much of a line here as you will elsewhere. Either way, the gelato is still top-notch. Food writer David Lebovitz particularly likes their espresso granita.
Palazzo del Freddo Giovanni Fassi
Via Principe Eugenio 65-67
In addition to the historic center of Rome, another place you’re likely to spend time around is Termini train station – so it’s nice to know that a great gelateria, Palazzo del Freddo Giovanni Fassi, is nearby. It’s reportedly Rome’s oldest gelateria, opened in 1880, and it’s been at the Via Principe Eugenio location since 1928. Today’s owners are the fourth generation of the family that first started the gelateria. In addition to the regular assortment of gelato you’ll find here, Palazzo del Freddo also makes what they call “Sanpietrino” – little bite-sized pieces of semifreddo covered in chocolate icing.

View Rome Gelato Shops (Besides EPL One) in a larger map

There’s More Where That Came From… 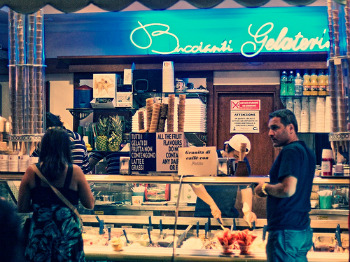 Any Rome guide worth its salt will list the most famous gelato shops in Rome, but no guide could hope to list all the gelato shops in Rome. There are just too many of them. And that’s a very good thing, indeed.
There is bad gelato in Rome, to be sure – there’s bad gelato all over Italy. But it’s easy to avoid, and as long as you know what to look out for then you can wander around Rome without worrying about whether the gelateria you’re zeroing in on is listed in a guidebook or not. You’ll be able to have an authentic gelato experience, just like the one Elizabeth Gilbert had in “Eat Pray Love,” without turning it into some kind of pilgrimage.
As I suggested in last week’s article about the best Naples pizza places that aren’t the “Eat Pray Love” one, there are people for whom a trip to Rome won’t be complete without eating at exactly the same gelateria in Rome that Gilbert (and Roberts) ate in. If you’re one of those people, that’s fine. But remember that when Gilbert went into San Crispino she did so on the recommendation of someone she met in Italy – she wasn’t following an itinerary laid out in a guidebook, or the instructions of an author. If you, too, would like to have that kind of gelato experience in Rome, I suggest you learn what makes gelato great so you can be on the lookout for a fantastic gelateria in Rome – and (even better) chat with the locals to find out where they go for their own gelato treats.
(P.S. You should also know that San Crispino, the gelateria Gilbert visits in her book, has several locations – yep, it’s a mini-chain – and she doesn’t say which one she goes to. There are two near the Pantheon/Trevi area, so it could be either one of those. Yes, feel free to try both.)
>> Read all about how to find good gelato, how to order gelato in Italy, and learn what the Italian gelato flavors translate into. And there are more stops on my friend Sara’s Tour del Gelato worth visiting, too.
photos, top to bottom, by: dog4aday, sarah|rose, dearbarbie, The Wolf