Different Kinds of Restaurants in Italy 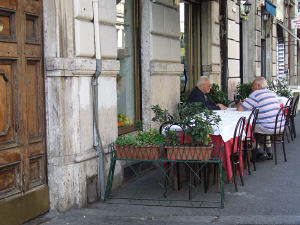 In many parts of the world, it’s easy to figure out which business storefronts are the local places to eat – the dining tables, menus on the wall, and yummy aromas usually make it a no-brainer. But in Italy, there are so many different names for places to eat – what do they all mean? Here’s a list of what the different kinds of restaurants in Italy are, what the words mean, and what you can expect in each one.

There will certainly be exceptions to the rules laid out below, so your best bet in any situation if you’re looking specifically for the cheapest place to eat is to check the menu before you take a table. Almost every eatery will have a menu posted outside so you can check not only what’s available but what it’ll cost you. If they don’t have one on display, don’t hesitate to ask to see one.

For more information, see this page