How to Order Gelato in Italy 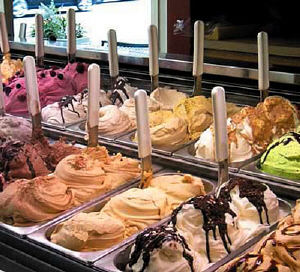 If you’ve been paying attention, you’ve studied my vocabulary list of Italian gelato flavors and you’ve taken notes on my tips to finding good gelato in Italy. Now comes the best part – actually trying the gelato. But believe it or not, you’ve got a little learning left to do for this part, too, so here’s my primer on how to order gelato in Italy.

I will say that although these guidelines are generally still in practice almost everywhere I’ve ordered gelato, there are bound to be exceptions. As always, when in doubt about the process, watch someone else do it first and then copy them accordingly. As an added bonus, this waiting and watching gives you more time to check out the flavors in the gelato cases!

First things first, we’ve got more vocabulary words to master. I know, you thought you were done with all that when you memorized your favorite gelato flavors, but unfortunately there’s a bit more to think about. Do you want a cup or a cone? One scoop or two? (Or three!) It’s a short vocab list, so don’t worry too much. Besides, the end result is you’ll get Italian gelato, so it’s not all bad.

How to Order Gelato in Italy 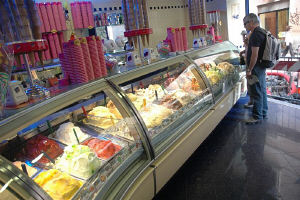 In most gelato shops in Italy, you’ll need to pay for your order before you’ve actually ordered it. This is because the person who takes your money and the person who actually scoops your gelato can be two different people, and sometimes they’re even in two different parts of the store. It may seem like an extra step, and it may seem like a hassle, but think of it this way – money is dirty, and by not handling money the people who are in close proximity with gelato that’s destined to be in your mouth are keeping their hands clean. This, in my estimation, is a good thing.

So here’s how it works – you pay first, then you choose your flavors and get your gelato. Let’s use a scenario to help illustrate the steps.

Pay First
Let’s say I want two scoops in a cone (because, as it so happens, I do want two scoops of gelato in a cone right now) – I don’t need to know what flavors yet, I just need to know the quantity and the container. I’d go up to the cashier and say, “Un cono con due gusti, per favore,” or “A cone with two scoops, please.” I’d then pay for my gelato and I’d be given a receipt showing the paid amount.

Browse Flavor Options
Now that I’ve got my receipt, I mosey over to the gelato counter and start perusing the flavors. Be aware that if you’re holding a receipt and not gelato, you’ll probably be asked pretty quickly if you can be helped by someone behind the counter – especially if the place isn’t that busy. If you’re still browsing, you can say, “un attimo, per favore” (oon AH-tee-moh), meaning “just a second, please,” or “non sono pronto” (non SOH-noh PRAWN-toh – for men; it’s “non sono pronta” – PRAWN-tah – for women), meaning “I’m not ready.” Or do what I do and just don’t make eye contact until you’re ready!

It’s important to note here that while you’ll line up to pay for your gelato and get your receipt, you won’t be waited on in a particular order at the actual gelato counter. This does give you time to look over all the flavors, so you don’t have to feel pressured to come up with your order immediately, but it also means that you can’t get upset if someone who paid after you did knows what they want and walks out with their gelato before you do. 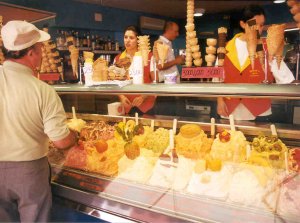 Okay, so now I’ve decided which flavors I want, so I make eye contact with the next available gelato scooper, who may say any number of things, including “prego” (PREH-goh), meaning “please,” or “dimmi” (DEE-mee), meaning “tell me.” Whatever it is, if they’re lookin’ at you, you’re on. I’ve chosen raspberry and dark chocolate (a particular favorite combination), so all I need to do is hand my receipt to the person behind the counter – so they can see how much I’ve paid for – and it’s at this point that I’ll say, “Lampone e cioccolato fondente, per favore.” (see the gelato flavors post for those, and other, pronunciations!). Depending on the way the shop is set up – if the prices for cones and cups are the same, for instance – I may have to repeat that I’d like that in a cone, which would be, “Un cono di lampone e cioccolato fondente, per favore.”

And a few seconds later, after saying a hearty “Grazie!” to the kind person who gave me my gelato, I’m happily walking out of the shop with my treat.

Practice Makes Perfect
As with basically every new skill, it’s best to practice often in order to get really good at it. In this case, that means ordering – and eating! – lots of gelato in Italy. It’s a tough job, but somebody’s gotta do it. Why not have it be you?

And for a bit more of a look-see into what you can expect before you arrive in your first gelateria, check out this video from Florence: