How to Find Good Gelato in Italy 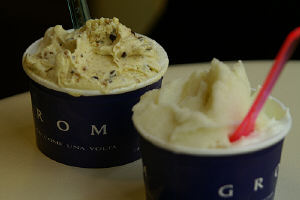 I have a friend who lives here in Italy, an expat who’s made the move I’m trying to make, who dutifully instructs all her visitors that they are required to have no less than two scoops of gelato every day they’re in Italy. I’ve adopted this rule as my own, and tell everyone I know who’s going to Italy (that means you, too) the same thing. But in order for you to have the best gelato in Italy, there are a few rules you should learn beforehand.

I know, I know – it’s just ice cream, right? How can it be that there are rules about ordering ice cream? Well, it’s not so simple, and if you learn a little bit about the art of Italian gelato before you set foot in a gelateria, you’ll save yourself the indignity of paying your hard-earned money for bad, mass-produced gelato that really should end up in a trash can rather than your mouth. The good stuff is so good that wasting precious calories on bad gelato is really a crime against humanity. Or at least a crime against your taste buds.

>> Don’t miss my handy vocabulary list for Italian gelato flavors, and the things you need to know about ordering gelato in Italy, too!

First, a little background about Italian gelato. It’s not ice cream, although that’s the closest approximation most of us have seen outside Italy. While ice cream is made with cream, Italian gelato is almost always made with milk. It’s richer, smoother, creamier, more flavorful, and altogether a bazillion times better than your average ice cream. The fruit flavors taste like you’re eating fresh fruit. The cream flavors have the texture of silk. The chocolate flavors are so rich you’ll need a bottle of water to wash them down. It’s also not just something tourists slurp by the truckload in the summer – it’s something real Italians eat on a regular basis. Gelato is an inexpensive treat, and you’ll often see locals licking a cone during their evening passeggiata – something you should mimic every chance you get.

If, however, you sully your tongue with bad gelato, you’re going to think everything I’ve said so far is crazy talk as you head for the local Baskin & Robbins. Don’t let that happen to you. It’s easy to steer clear of bad gelato, and here are some of the best ways to do just that.

I know other people have their own strict rules about gelato in Italy, so if you’ve got a tried-and-true rule you want to add to mine, be sure to leave a comment below!