This article was written and submitted for publication on the Italy Logue by Chris Bright. 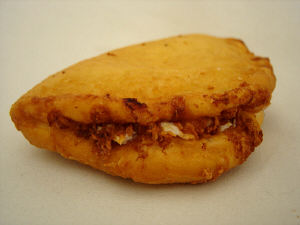 When visiting the historic center of Milan, grabbing a quick lunch can be a challenge since the options are limited to fast-food chain restaurants [editor’s note: which you should stay away from!] or more pricey sit-down places. However, the perfect antidote for these uninspiring choices is to make your way to Panificio Luini near Milan’s Duomo. Join the throngs of fashionable Milanesi office workers – as well as in-the-know tourists – who line-up by the dozens for Luini’s famous panzerotto.

A panzerotto is a unique and fulfilling treat – it is the golden lovechild that would result from the loving union of an old-fashioned raised doughnut and a traditional Neapolitan pizza. The outside is comprised of light, springy yeast dough with a pleasant but not overwhelming sweet flavor. On the inside, folded over like a little calzone or empanada, is tomato sauce, mozzarella and, if desired, one or two savory ingredients. Finally, the magic happens when the whole package is deep-fried and served hot. The combination of sweet and savory flavors and chewy and creamy textures are each recognizable and familiar, but it’s the first bite that is truly the revelation.

Although it has been embraced by locals, the panzerotto is an immigrant to Milan from the southern Italian region of Puglia. The Luini bakery arrived on Via San Radegonda in 1949 when the family matron, Giuseppina, set up shop in the shadow of the Duomo in post-war Milan. She decided to introduce the panzerotto, a specialty from her home region, to her line of baked goods and it took off. The secret recipe is still guarded by the family as her son and grandchildren still own and operate the family business according to Nonna Giuseppina’s high standards of quality and fresh ingredients. 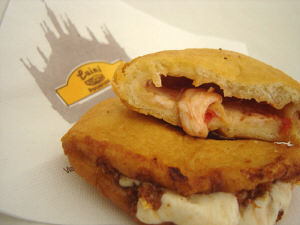 The warm, sweet dough with a few simple ingredients is a deal, as well as a meal. The standard panzerotto, with mozzarella and tomato sauce, goes for €2.30 and they max out at around €3. You will also find options with ham (crudo), mushrooms (funghi), ricotta and other seasonal ingredients. Panzerotti are on the small side, so getting two may be advisable if you have a built up an appetite.

On the other hand, you may want to save room for some of the sweet variants, called panzerotto dolce. While they share the same form, they are an entirely different species. The dolce versions are baked and use a shortbread crust so they are much more akin to a pastry. At the top of the list is a version that is typical of Puglia with a stuffing of figs, nuts and cacao (cocoa). The combination of the dark, rich filling and flaky, tender crust is delicious, but not nearly as exciting as its savory brethren.

If you go to Luini, one tip is to purchase your panzerotti there, but buy your beverages elsewhere. The drinks seemed to be significantly more expensive than other places, even in the touristy center of Milan. For example, a small can of Coke costs €1.90 – nearly as much as the main event. 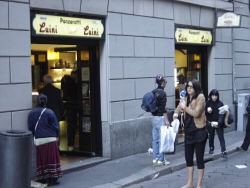 To arrive at Luini, the fastest and simplest way is to start outside of the north apse of the Duomo, just in front of the entrance to the roof. Directly across from the doorway is the start of Via Santa Radegonda. Head in that direction and look for number 16, about 100 meters around the bend, on the right. You will not be able to miss the golden Luini logo that is the same saffron color as the panzerotto crust. Is that brilliant branding or what?

If you see long lines, don’t be discouraged because the ladies at the counter run an efficient assembly line and it goes quickly. Really, would a true Milanese tolerate a long line if it didn’t move rapidly? There are two entrances and both are served by separate counters, so choose either line. Also, since there are crowds, you will see during the lunchtime rush a concession of panhandlers positioned at each entrance, so expect to be harmlessly approached while you wait.

Editor’s note: I first heard of Luini from the Milan episode of Samantha Brown’s popular travel show. And then I read Sara’s post about Luini over at Ms. Adventures in Italy. Apparently I’m missing out by not having eaten there myself!