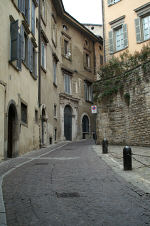 The alta città of Bergamo isn’t exactly swimming in restaurants, so your choices are kind of limited from the second you decide to stay within the old city walls up there. But on my recent trip to Bergamo, I ate in a charming little trattoria tucked into quite literally a hole in a wall on one end of a parking lot. The outside may not have looked promising to most, but the food was spectacular.

Trattoria 3 Torri has the feel inside of a wine cellar, with its rounded brick walls and ceiling, and it’s one of those tiny places that makes the most of every inch of space. The parking lot the restaurant sits on is really a small piazza, and three of the buildings lining it have towers – hence the name of the trattoria. The handwritten menu outside the door looks like it could change regularly, but I imagine that most of the Bergamo specialties are usually available. The prices were relatively similar to the other restaurants around the alta città.

Here’s what we had for lunch:

In addition to the dishes that are particular to Bergamo, the Trattoria 3 Torri also offered several regular Italian dishes as well, for appetizers (“antipasti”), pastas and main courses. The husband and I shared a half-litre of red wine, and each had coffee after our meal (a note to coffee fanatics, they don’t have an espresso machine, only a mokapot), and everything was just great. There was something listed on the menu called the “dolce della casa,” but we were both so full from our rich lunches that we had to pass on dessert. I’m still curious what it was.

The service was friendly – we got complimented on our orders, having both ordered local specialties – and although when we arrived at noon the place was empty, it began to fill up about a half-hour after we started our meal. Of course, it’s such a small dining room that by “fill up” I mean that four of the seven or so tables were occupied. If you’re spending a day in Bergamo, you could do much worse than to have a meal at the Trattoria 3 Torri.

(And no, that’s not a picture of the restaurant – or even the street the restaurant is on – up at the top of this post. I was so full and content with my meal after leaving that I forgot to snap a picture. Sorry.)