Vivoli in Florence: Can Famous Gelato Live Up to the Hype? 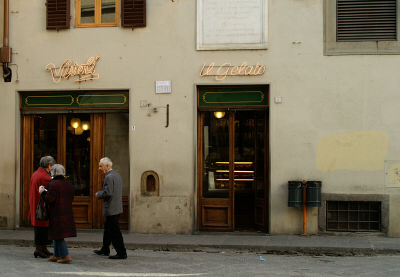 When I was planning my last trip to Florence, I checked my friend Sara’s Tour del Gelato for a list of the gelaterie I should make sure to sample when I was there. Florence is recognized by many as a gelato capital of Italy, where it’s harder to have bad gelato than it is to have good gelato – so imagine my surprise when I found that there was only one entry on the Tour del Gelato in Florence! Folks, I knew right then what my mission had to be – eat as much gelato in Florence as I could. It’s a tough job, but I knew I had to do it. For the children.

As I said, Florence is known for its gelato. So in this City del Gelato, is there one shop that is considered by locals and tourists alike to be the pinnacle of the art form? In fact, there is – it’s Vivoli. In my previous visits to Florence I hadn’t yet sampled Vivoli’s gelato, so I made a beeline there on this last visit. With all the build-up to how amazing the gelato at Vivoli is, and how famous the shop is (Frommer’s says, “Exactly how renowned is this bright gelateria? Taped to the wall is a postcard bearing only “Vivoli, Europa” for the address, yet it was successfully delivered to this world capital of ice cream.”), I was surprised at how understated the exterior of the shop actually is. I visited on a Saturday afternoon in mid-March, and I still thought there’d be a line outside the door and around the block. But no, there was only a small neon sign above the door and a trio of locals out front scooping some of the Vivoli gelato into their mouths. 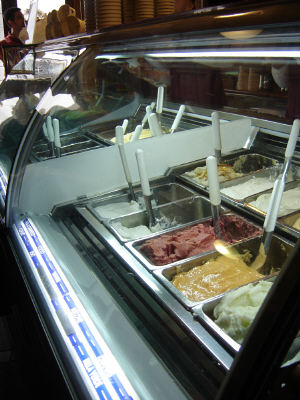 Inside, the space is cramped; you pay the cashier who is perched in front of the doors and take your receipt to the left where you’ll choose your gelato flavors. There are no cones at Vivoli, only cups – and all of the sizes are more expensive than most other shops I tried in Florence (and outside Florence, for that matter). I suppose with the reputation Vivoli has they figure they can get away with that – and I guess they do, because I didn’t walk out!

Vivoli prides itself on (among other things) selling only the flavors of gelato that they have made that day, so everything is made fresh and the flavors can change frequently. While I normally get cream or chocolate based flavors, I saw a flavor in the Vivoli case I couldn’t resist – pera con caramello, or pear with caramel. It was basically pear sorbetto with pieces of caramelized sugar in it, and since I’m a sucker for both pear and caramel it was a done deal as soon as I saw it. The problem then was, what to order with it?

As an aside, I have a bad habit of choosing one gelato flavor that I simply must have, and that flavor is extremely difficult to marry well with another flavor. I have a hard time finding a good pairing for chocolate orange, for instance, or licorice. But that’s for another post. Getting back to my dilemma at Vivoli…

Generally, when I’m faced with my one must-have flavor and stuck with what to get with it, I ask the person behind the counter to suggest something. Usually I get good advice. At Vivoli, I got a blank stare. The gal who was scooping my gelato wasn’t interested in being my gelato sommelier, she just wanted to put some gelato in a cup for me and be done with it. So, in a split-second decision I chose mela verde (green apple) sorbetto to go with my pear/caramel sorbetto. 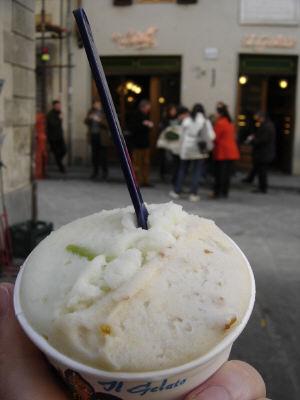 Both flavors were, I’m happy to say, splendiferous (that’s a technical gelato term). The green apple tasted like a crisp green apple, and even had pieces of apple throughout it. The caramel pear had the texture of a pear, and the subtle flavor of the caramelized sugar chips was lovely with it. Vivoli isn’t exactly generous with the portions (this on top of higher prices, remember), so you don’t get to savor your gelato for too long before you hit the bottom of the cup. But what you get is really good, and made with excellent ingredients.

If you’re a gelato connoisseur, then a stop at Vivoli is a must – if for no other reason then to tell your other gelato connoisseur friends that you’ve been there, done that. If you’re pinching pennies, Vivoli might be €1 more than you’re willing to spend on gelato – especially with the smaller-than-usual portions. And the good news is that’s okay. There’s plenty of other great gelato in Florence, too.

Gelateria: Vivoli
Location: Via Isola delle Stinche 7 50122 Florence; it’s roughly a block northwest of the Piazza Santa Croce
Open: Tuesday-Sunday, 09:00-01:00 (closed in August and January-early February)
More Information: https://www.vivoli.it/, tel – +39 055 292 334
Good to Know: The portions are a little smaller, and prices are a little higher – so if you can splurge, get one size bigger than you usually get. Also, there are no cones available at Vivoli – only cups.
Go or No? The gelato is great, and made with high-quality fresh ingredients – and it’s still not my favorite gelateria in Florence. It’s a good gelato experience, but not necessary if you’re not in the neighborhood or determined to try the famous Vivoli.

Be sure to study these Italian gelato flavors, read my guide to good gelato in Italy, learn how to order gelato, and remember to check out the other stops along the Tour del Gelato – you can easily eat your way through Italy on gelato alone, so why not give it a try?