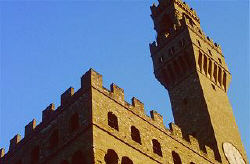 What I’m about to do here is foolish by any measure, I’ll admit that right up front. See, my task on this particular page is to tell you about the history of Italy in about 500 words. Yes, I think I’m going to go over that mark – especially if I keep using up words here in the introduction to tell you about it! My point, however, in telling you that what I’m about to attempt is utter lunacy, is to help you understand that while I can give you a snapshot of Italian history I am, without a doubt, going to leave out gobs and gobs of important stuff. That means that you’ll either have to be satisfied with the incomplete and partial knowledge you’ll have after reading this page, or you’ll have to continue your research elsewhere.

Can you have a good vacation in Italy without understanding its history? Sure. But a great vacation? I’d argue that no, you can’t do that without at least a modicum of understanding of the rich history of this incredible country. Because while modern Italy and modern-day Italians are very much living in the present, everything about Italy is tied to its past. And I do mean everything.

So – where to start? How about 200,000 years ago? Yeah, that sounds about right. Grab some popcorn and sit back, this is gonna be fun. No, really.

>> And don’t forget to check out my quick lesson on what the colors of Italy’s flag mean, too!

We’ve all heard of “Ancient Rome,” but there were people living in Italy long before Caesar and company. In fact, there’s evidence of people in some parts of Italy as many as 200,000 years ago. But the first group of pre-Roman people that you’ll need to pay attention to are called the Etruscans. At the height of the Etruscan civilization (roughly 750-500 B.C.E.), their territory spread from present-day Tuscany north almost to Venice and south into the Campania region. Little is definitively known about the Etruscans, although you’ll see and hear about Etruscan ruins throughout central Italy. Another group of people that also inhabited Italy before the Roman empire were the Greeks – they were so prevalent in the southernmost points of mainland Italy and Sicily that the Romans referred to those areas as “Magna Graecia,” or “greater Greece.”

The Roman Empire of Caesar and Friends

Once the Romans invaded the primary Etruscan cities, it was only a matter of time before the Roman empire spread its tentacles into the world. Well, okay – it was more like a matter of several centuries, but you know what I mean. What began as a little agricultural backwater turned into an empire with a massive reach over the span of 12 centuries. The map below shows the extent of the Roman empire at its peak. Pretty amazing domination, don’t you think? 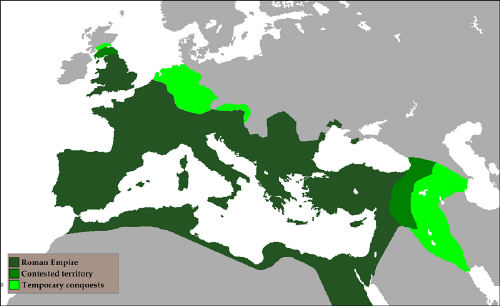 This is why, even though you’ll marvel at the Colosseum in Rome, you don’t have to go to Italy to see Roman ruins. Still, walking the streets of the Roman Forum – the point from which that whole empire was governed – is enough to give you chills. All good (and bad) things must end, however, and that included the mighty Roman empire, which began to fall into decline in the 3rd century.

The Darkest Hour is Just Before Dawn (or the Renaissance)

Post-Roman empire, modern-day Italy fell into a patchwork of city-states which no one empire could bring together to form a nation. Leadership of these city-states was haphazard at best, and led to lots of rivalrous in-fighting between neighboring cities. Some city-states chose to keep the power in the hands of a group of people representing the city (called a Commune), while others opted to give the power (either formally or informally) to one man (who was called a Signoria) or family dynasty in the hopes that a powerful personality could achieve and maintain order.

This period of time, the Dark and Middle Ages, can be seen now as a period of transition – but it was by no means only a period of unrest. Several city-states experienced some serious boom years during this time, largely due to their positions as busy ports. Venice and Genoa were foremost among the port republics in Italy, and they capitalized handsomely on their importance to world trade routes.

The Birth of the Renaissance Man

Along with the sights of Ancient Rome, it’s the Renaissance masters who draw tourists to Italy by the thousands each year, and that’s no surprise. The movement we all call the Renaissance, which means “rebirth,” originated in Florence in the 13th century. The name refers to the idea that during this time, scholars, artists, thinkers, philosophers, etc. were going retro – they went back to classic ideas and ideals which had been all but forgotten for centuries. Names we all recognize from the Renaissance – names like Leonardo da Vinci and Michelangelo – came later, after the groundwork was laid by people like Dante Alighieri, but from the 13th through the 16th centuries, art and thinking flourished in a way it hadn’t for a very long time. The result is that many of the most famous works of Italian art and scholarship come from this period.

Everybody Wants You (if You’re Italy)

Following the years of the Renaissance, a few foreign governments decided they wanted what Italy had – so began fighting over dominion of the country. First it was France vs. Spain (Spain won), and later Spain’s domination transferred to Austria. When Napoleon rose to power in France, he came in and took over control for a short period of time as well, until he was defeated in France.

Now, it might seem strange that Italy, this once-powerful center of the mighty Roman empire, was just sitting by and watching the tennis match of “who’s ruling me now?” play out. But it’s important to remember that throughout this whole time, there was still no unified country of Italy as we know it today. The country was still made up of a patchwork quilt of city-states, none of which was powerful enough to rule all the others, or to fight of invaders. And throughout this period, city-states didn’t find any enemy so egregious that they’d want to band together to fight off. All that was about to change, however.

Risorgimento, or Why the Name Garibaldi is Everywhere

It took the efforts of an Italian nationalist called Giuseppe Garibaldi to begin a unification movement in Italy in the late 1840s, following the failure of the first attempt at a war of independence from Austria. Garibaldi had the confidence of southern Italy, while in the north the Savoy family (northern Italian royalty) rallied its followers toward a unified Italy. The Savoys had succeeded in pushing the Austrians out of northern Italy, so they were on a roll and used that momentum to their advantage.

In 1866, the Savoy king, Vittorio Emanuele II, was able to gain control of Venice in exchange for Italian alliance with Prussia against Austria. This left only the city-state of Rome out of a unified Italian state. When France, which controlled Rome at the time, left its posts in the Papal State to fight Prussia, the newly minted Italian forces went in and captured the city-state for the new country of Italy. In 1871, the Italian capital was moved to Rome. Giuseppe Garibaldi and Vittorio Emanuele II are both quite revered in modern-day Italy, one as the people’s hero and the other as the first king of unified Italy. (And, just for a little tidbit of trivia, Garibaldi even offered his services to American President Abraham Lincoln during the U.S. Civil War.)

Turns Out Fascism Was the Wrong Choice

In the 1920s, the fascist party was gaining power in the still-new country of Italy under the leadership of one Benito Mussolini. Mussolini, called “Il Duce” by Italians, fought back harshly against striking workers throughout the country, abolished all the political parties and put severe restrictions on civil rights. He claimed he was trying to prevent a revolution. He sided with Germany during World War II, the result of which was the invasion of Italy by the Allies in 1943. Mussolini was arrested that year, although a fascist state was maintained in northern Italy under German rule until Italy surrendered and Mussolini was executed in 1945.

Following the second World War, Italy became a republic and the king abdicated his throne. After that, things get considerably more muddy. There were several years of riots, terrorist acts and general unrest – collectively called the “Years of Lead,” or “Anni di Piombo” – during which political figures were targeted, sometimes successfully, in assassination attempts. The government was widely considered to be corrupt, and this attitude toward politicians continues in some fashion through to today (even though there was an attempt to clean up the government).

Italian Prime Ministers have a habit of not staying in power very long, and there are more political parties in Italy than you could count on both your hands and feet even if you had six fingers and toes on each appendage, so it’s not surprising that politics in Italy can be confusing to locals and utterly baffling to outsiders. The good news is that the chances of you having to understand it for a vacation in Italy are slim!

So, that’s it – that’s Italian history in a nutshell. And it only clocks in at just under 1600 words! Seriously, though, I’ve left all kinds of important stuff out, just like I said I would, so if you want a more in-depth look at the history of Italy (one that’s readable, not like a textbook), try Harry Hearder’s “Italy: A Short History.”

Whether or not you take to studying Italian history, the things that are important for tourists to understand are: