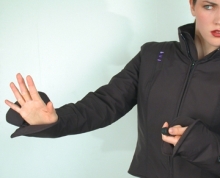 You can say the Italians are overly concerned with their attire, but you can’t say they’re not thinking of personal safety at the same time. The “Defense Jacket” will set off a 130-decibel alarm when you pull the cord, alerting anyone around that you’re being attacked. Conversely, it may cause anyone within earshot to run for cover, thereby leaving you more alone than you were before. You just have to hope your attacker isn’t wearing earplugs. If the ear-splitting alarm isn’t enough, however, the jacket also has a hidden pocket with pepper spray in it.

I can’t find a picture of this thing, which is annoying, although I did find stories about a self-defense jacket that will shock anyone who’s grabbing you without your prior authorization. I don’t think it’s the same one. And now that there are two of this kind of outerwear on the market (maybe more?), perhaps we should all be asking permission before we go hugging people on the street. Also, what the heck are you supposed to wear in the summertime? A defense halter top? Where would you hide the pepper spray on that?