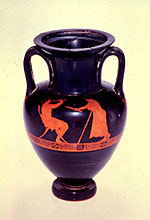 Lest you think Italy is picking on the Getty museum because of some long-standing grudge against the US, they’re asking Japan to return the things they claim were “stolen” as well.

Italian authorities “suspect that up to 100 treasures from ancient Rome were looted” and they’ve asked the Japanese government to help in returning the items to their homeland. Officials in Japan, however, say they’ve not been contacted by the Italians. I’m thinking someone can put that question to rest easily with an email print out or telephone log. The real question is whether the artifacts were dug up illegally, and to determine the answer to that question, Japan wants proof.

Italy is clearly on a quest to retrieve all illegally-gotten art. It’ll be interesting to see how successful they are, and how much they’re willing to spend to get what they want. After all, everyone has their price.