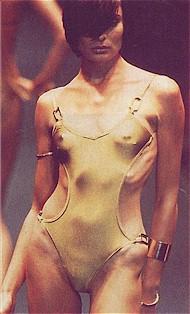 Even the fashionistas in Milan think there’s such a thing as “too skinny.” Late last year, it was announced that women who are deemed too thin will be banned from February’s prestigious fashion shows in the world’s fashion capitol. Models’ BMI (body mass index) will be calculated, and anyone with a BMI of less than 18.5 will be sent home (hopefully with a box of cookies and an order to see a doctor). Other new rules for next month’s fashion shows include a minimum age limit of 16 for models, and a “ban on using make-up to achieve an ‘anorexic look’ with dark shadow under the eyes.”

Italy is the first country to combat the move toward stick-figures on runways, though the issue is getting more attention after two models died from eating disorders last year. Eating disorders, particularly bulimia, are a growing problem among young Italian women. One would hope other fashion houses around the world will soon follow Milan’s progressive step in the right direction.