Raikkonen: Shades of Schumacher in Red 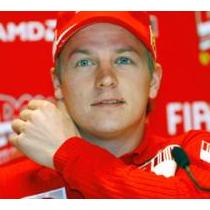 I know jack squat about car racing, except that the cars go really, really fast. The husband is a fan of any sport that involves wheels and speed – and Italy provides plenty of both. In 2004, the husband went to Monza to see a Formula 1 race, and was lucky enough to be there for a 1-2 Ferrari finish – even though the drivers weren’t Italian, the Italian crowd only cared that they were driving Italian cars.

Formula 1’s golden boy, Michael Schumacher, retired last year, and Kimi Raikkonen has taken his place on the legendary Ferrari team after five seasons with McLaren. Raikkonen was sporting Ferrari red for the first time on the 12th at a press conference in Italy.

Raikkonen, nicknamed “Iceman” for his ability to be cool under pressure (and also perhaps for his Finnish inability to show any kind of emotion whatsoever), says that Schumacher “was a great driver. But I am Kimi, not Michael. I have my own way of working and I’m not going to change it.” I might not know anything about the sport, but I recognize that kind of attitude. It’s the same one his predecessor sported.