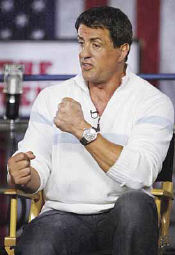 Sylvester Stallone was in Rome last week promoting the latest installment of the Rocky series (I think we’re up to Rocky 347 now), and didn’t waste the opportunity to also talk about his other new back-from-the-grave movie series, Rambo.

In Rambo IV, expected to be released in 2008, the indestructible warrior is recruited by a group of Christian human rights missionaries in Burma to protect them against pirates.

“He’ll be a man who’s lived for 20 years in the East Asian jungle and become like an animal. I’ll be a sort of gorilla. To get like that I’m going to train with enormous weights,” he said.

If I had any aptitude with PhotoShop, I’d have clipped Sly’s face and slapped it on the body of a gorilla. Because a Google search for such an image comes up with nothing. This, my friends, is a travesty.

Unless you think that he actually kind of looks like a gorilla already, in which case, what would be the point?