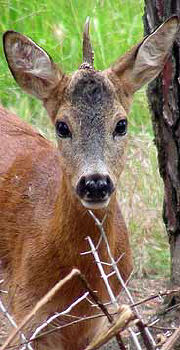 Who says genetic flaws are inherently bad? This baby deer found in a park in Tuscany would be just one of the crowd if not for its genetic mutation – instead of two horns, this little fellow has one. And it’s smack dab in the center of its forehead, making it – sort of – a real-life unicorn.

The deer/unicorn in question can be found near Florence, in a Prato park called the Center of Natural Sciences, and it’s already attracting quite a bit of attention from the international media. The park director has speculated that this rare genetic flaw may be what originally led to the legends about unicorns, but the same can be said of just about any horned animal that gets its genetic wires crossed. Whatever the history of the unicorn legend, and whatever the reason for this little deer’s single antler, it’s made the deer (and the park) quite famous. He’s been nicknamed (perhaps not so creatively) “Unicorn.”

Here’s a little video that shows the single-horned deer (along with his two-horned twin), and you can read more about “Unicorn” here, here, and here.