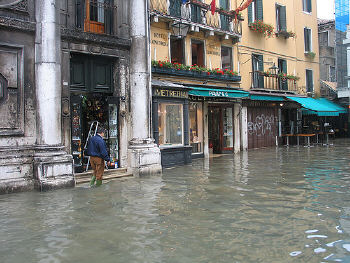 Anyone familiar with Venice knows that the city has an issue with water. Its relationship with the water that surrounds it is complicated, and the fragility of this canal city is part of what makes it both endlessly romantic and in a constant state of peril. And now that winter has once again come to Italy, Venice is once again suffering from the famous “acqua alta.”

“Acqua alta,” or “high water,” is a fact of life in Venice – there is a good portion of every wet season when it’s easier to get across St. Mark’s Square with a kayak than on foot, and when Venetians understand that the height of fashion is knee-high (or higher) wader boots worn over your Armani suit. In fact, one statistic says that Venice deals with some level of flooding – from an oversized puddle in the middle of St. Mark’s Square (the city’s lowest point) to several feet of water everywhere – roughly 200 days out of every year. Long-time Venetians probably get more wear out of those rubber boots than their Prada loafers.

So it’s not the fact that Venice is flooded yet again that makes it newsworthy, it’s the fact that this year the waters have already risen higher than any time since 1986.

Earlier today, Venice’s streets were hit with flood waters that were more than 5 feet above the “normal” flood levels. The high water was driven partly by tides (which is one reason the water level has already gone down), and partly by high winds. Venice’s mayor has advised people to avoid going out if they can, largely because the water that’s flooded the city is quite polluted, and the city’s flood warning system of sirens and loudspeaker announcements has been going strong.

The residents who live on the ground floor are pumping out the water from their houses with buckets. The water is highly polluted and is beginning to smell, as well as leaving behind rubbish of all kinds on the street as the water levels decrease.

I have a serious thing for Venice, and although I know the city’s been dealing with high water and lots of other problems for hundreds of years, I can’t help but be saddened every time I hear stories like this. One friend said, “They’ll survive. They always have.” And I know it’s true – the Venetians are resilient, and they’ll make do. What I’m concerned about is Venice herself – because at some point, unless engineers and city planners can come up with a way to stem the tides, the survival of the people who live there will mean they’ll leave and go live somewhere else.

>> If you’re planning to visit Venice anytime soon – or, frankly, at any time during the winter – you are advised to check out a current weather forecast and read current news reports to find out whether the “acqua alta” is creating problems.

original photo at top by gwenael.piaser