Way back when, Italy had the common sense to shape itself into a recognizable image – that of a boot – which makes it extremely easy to identify on world maps and globes. What’s more difficult, however, is identifying all the regions within Italy.

I tend to think of them in terms of where they are on the leg (Rome is approximately at the knee, for instance), so if that helps you be my guest and use my trick. Of course, it means you have to think of Italy as a thigh-high stiletto rather than just a short boot, but I think that sort of suits the country anyway.

Map of Italy with Cities

Here is a map of Italy’s regions with some of the major cities in each region marked: 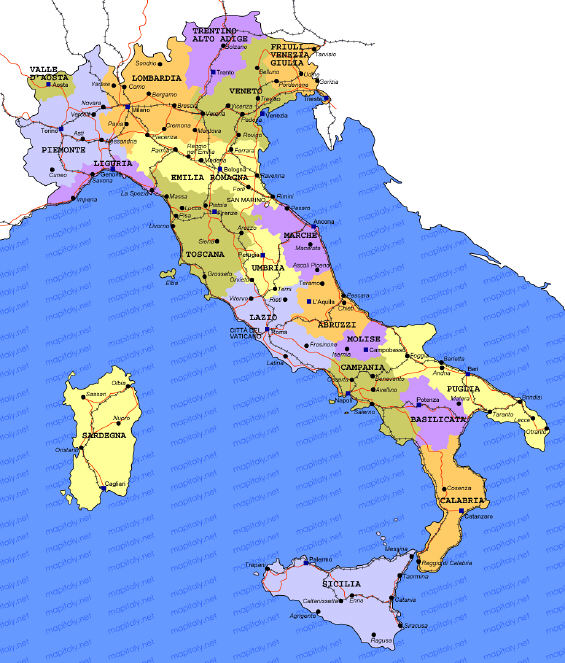 Obviously, you’re not going to use this map for anything but a general reference point. If you’re going to be doing any driving in Italy, you’ll want to get your hands on a good driving map – like a Michelin or Hammond folding map of Italy or a spiral-bound “motoring atlas” – which has all the roads well marked. You’ll probably need to buy those maps ahead of time, but if you arrive in Italy and decide you want to rent a car and take day-trips to explore the region that’s within a few hours of your hotel, you can always pick up a good regional map in the bigger tourist centers (ask at your hotel, they should be able to help you find a good map) – these will be the most detailed, and best for driving, because they only cover a small area of the country. They’ll often have roads marked that no other map has, and which you might not otherwise take!

And for touring cities on foot or by public transportation, be sure to either get a good guidebook that includes good city maps or pick up a few of my favorite city maps for the cities you’ll be visiting. Keep in mind that even my favorite Venice map is all but useless for anything but the most general directions (although the vaporetto map on the back is excellent). For the maze-like canal city, check out this fantastic online Venice map that will help you locate any address in the city.