Benefits for unmarried couples in Italy? Not so much. 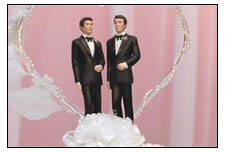 I remember how difficult it seemed eloping in Italy was going to be (which is why the husband and I ultimately ended up in Scotland), and I chalked that up to the proximity to the seat of the Catholic Church. Eloping, however, is child’s play next to gay marriage. (Wow, that really doesn’t sound right, does it?)

A gay MP last week called a bill to grant rights to unwed couples – including gay couples – a way to “deal with this growing social emergency, which can no longer be avoided in national political debate.” If approved, the bill would “grant cohabiting couples, both heterosexual and homosexual, similar administrative and financial benefits to married ones.”

I was reading this article thinking, “Good grief, if Italy can do this, certainly the US can…” But it doesn’t look like it’s going to be sailing through the Italian Parliament anytime soon. It doesn’t even appear that the gay couple element is the only thing garnering opposition – one opponent said “married couples are one thing and unmarried ones are another.”

The opposition to this bill exists despite the fact that recent polls show nearly 70% of Catholics in Italy are in favor of this kind of legislation, no matter what the Pope says. The number of unmarried cohabiting couples in Italy has doubled between 1994 and 2003, and it has been pointed out that unmarried couples in Italy – of any sexual persuasion – have fewer legal rights than their counterparts almost anywhere else in Europe.