Making Friends at the Pasticceria 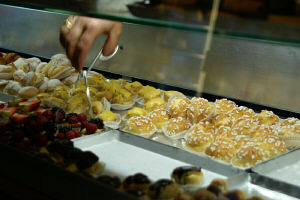 We spent Sunday afternoon wandering around the Brera neighborhood in central Milan, having a lovely little lunch, visiting an art museum (more on that later), and re-visiting a gelato shop we liked from our last trip to Milan. Then, on our way back to the apartment, we passed by a pasticceria near our place and stopped to peek at the window. Little did we know that would lead to one of the more delightful encounters we’ve had so far.

The windows of most pasticcerie are filled with Easter displays these days, including some gigantic chocolate eggs dressed in what seems like acres of colored metallic foil, and I wanted to get some photos of this window near our apartment. I didn’t notice that the proprietress inside wasn’t waiting on anyone at the moment, so she came out to say hello. Thankfully, she wasn’t angry with me taking pictures – on the contrary, she was just being chatty. The husband talked with her while I took a few photos and when he said we were American she asked if he was originally from Italy because of his language skills. Well, we don’t let that kind of compliment go unnoticed, so the husband immediately grabbed her and gave her “due baci,” a kiss on each cheek! She was so delighted, she invited us inside for samples of the delicious pastries in the shop.

After downing three nearly bite-size pastries apiece (I say “nearly” because they were filled with cream and one exploded into its paper cup when I bit it in half – I should have popped the whole thing in my mouth at once, apparently), we bought a small tray of goodies to bring home for later. And while the husband chose which ones to bring home, I took more photos – the woman helping us even turned on more lights in the shop for me – and she and the husband kept chatting. She was absolutely delightful; a man came out from the back (her husband, maybe?) and she bragged that she’d gotten two kisses from this nice young man… Very cute.

At any rate, although the pastries in the shop are far too expensive for us to make a habit of going there often, I think we both want to go back soon anyway – if for no other reason than to go visit our new friends across the street.