The Keys to an Apartment in Italy 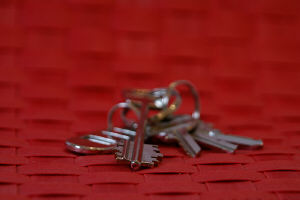 Well, the husband and I finally got to move into our apartment yesterday – we’re renting a furnished apartment from an agency in Milan, and thankfully the place matches the photographs exactly. Between those pictures and doing a little neighborhood research via this maps site (where you can do a bird’s eye view of places), we felt like we already knew what to expect. And the neighborhood itself, called the Città Studi (it’s near a school and apparently full of international students), seems like it’ll do nicely – at least for the time we’re here. The name on the apartment, and therefore on the buzzer outside the building, is Sangiovanni. So until the end of March, we’re calling ourselves Signor and Signora Sangiovanni.

That’s a picture of our keys up there; and I have to say I was more than a little pleased that one of the keys was a giant skeleton-key looking thing. It just makes me smile that there are doors that really open with those things. And it makes me smile even more that I’ve got one of those doors. Frankly, just having the keys to an apartment in Italy is making me smile right now.

After getting our stuff into the apartment and getting all the paperwork signed with the woman from the agency, we were finally able to unpack all our stuff – which felt great after four days cramped in a hotel room – and then we high-tailed it to the nearest grocery store to stock up on supplies.

Now, ordinarily, we quite prefer the idea of shopping for our vegetables at the vegetable market, our breads from the bakery, our meats from the butcher, etc. And we noticed there’s a communal market just a few steps from our apartment building, so we’re looking forward to checking it out soon. But this time we just needed to hit a big, generic grocery store – a “supermercato” – to pick up all the basics.

I had noticed that shoppers in another supermercato had been bringing their own plastic bags in to carry their food home (this is something I do myself when I’m at home, so I applaud the idea – but I didn’t bring my shopping bags with me to Italy), but we only had a couple of plastic bags with us to bring. So we had to get a few more at the supermercato, for which we were charged. I can’t help but think that if Americans were charged for every new grocery bag they had to get at the store (instead of the current system of a nickel reward for each bag you bring in) that more people would embrace the bring-your-own-bag idea.

At any rate, we got our goodies home and found places for everything in our bare cupboards, but it wasn’t until a few hours later that the husband realized something funny. This apartment seems relatively modern (at least to us), in that it has a rather large fridge, a dishwasher, and a closet in the bedroom (most old Italian buildings don’t have closets – people use wardrobes). But one thing you’d think would be in every kitchen, and yet is conspicuously absent in ours, is an oven. Very odd. The microwave seems smarter than we are, though, and the husband thinks he might be able to use it to bake bread, even. I’ll let him experiment with that…

The woman from the rental agency said that there’s a big open-air market on the street right in front of our apartment building every Friday. One side of the street is clothing, shoes, and other sundry items, and the other side is food. I’m really looking forward to that market. Oh, and one thing I was really excited about was finding our “local” bar, the one where we could go each morning for coffee and get to know the folks who work there. Luckily, the closest bar to our apartment, where we went for lunch yesterday, just felt right. The people working there were all smiles and welcoming. I’m looking forward to going again soon.

Honestly, I’m just looking forward to everything. Is that wrong?