The 2011 Giro d’Italia is about to begin – and whether you’re a cycling fan or not, if you’ll be in Italy in May this is something you need to know about.
Italy’s Giro is roughly equivalent to the Tour de France, in that it’s a three-week cycling race. The route changes each year, and although it always passes through un-touristy parts of the country it also regularly goes through areas that are very popular on the tourist trail. Italians love the Giro, and you’ll find people who live and work along the race route taking time out of their day to watch the riders go by – sometimes even setting up a picnic and enjoying a day alongside the race route while they wait for the riders.
As a traveler, it’s important to know where the Giro d’Italia will be so that you can plan your trip around it. If your trip will take you to any of the Giro cities and towns when the race is there, it can be great fun – or a big hassle. You’ll certainly run into big crowds and road blocks, not to mention the likelihood of hotels being booked solid. Of course, you’ll also get to see the area in its festival mode. In either case, it’s good to be prepared.
Here’s the 2011 Giro d’Italia race route – the start and finish cities/towns are listed by each date, but of course there are towns along the race route that aren’t mentioned below. To find out whether you’ll be in one of the towns along the race route during your trip, take a look at the official Giro race map below the list of race stages.
Also note that if you’re interested in checking out the race, some of the most fun stages to watch are mountain stages (because the riders are moving more slowly, so they’re not here and gone in the blink of an eye) and time trials (because riders go off one by one, so it’s a longer event in one place). Other things to look for are towns that serve as both a finishing town and a start town, as you’ll get to see more of the race than just one day’s worth if you’re in those places.
>> Learn more about the Giro d’Italia 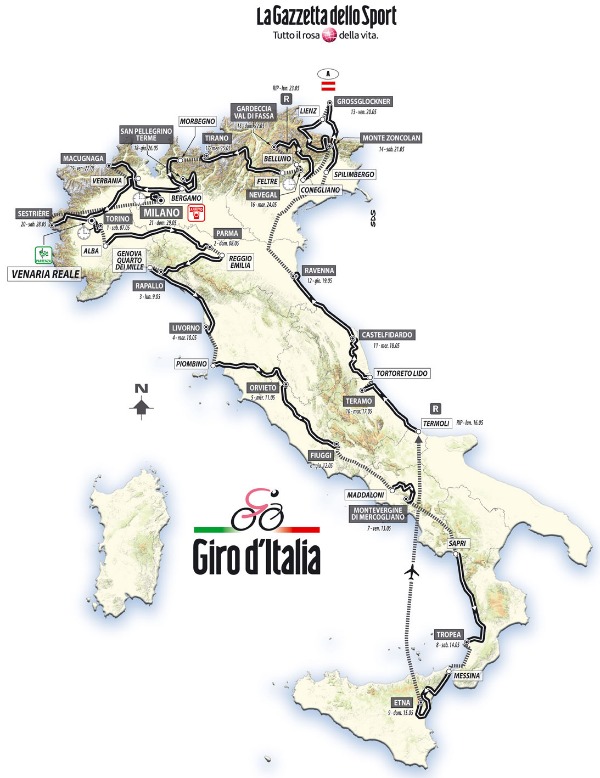