Just in time for the holidays, here’s an opportunity to learn a little bit about Italian culture and perhaps win a gift suitable for your favorite Italophile, too. My friend Kathy McCabe is the force behind the Dream of Italy newsletter. In this guest article for WhyGo Italy, Kathy talks about three of her favorite places in Italy to spend Christmas. 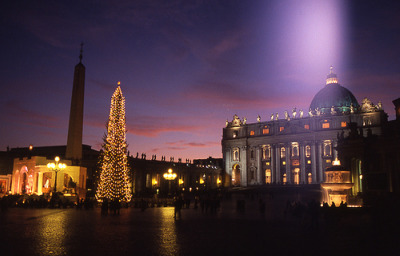 As the editor and publisher of a subscription travel newsletter devoted to Italy, many people ask me when the best time of year is to travel to Italy. They often wonder whether they should really avoid Italy in the summer or debate the pros and cons of a spring visit versus a fall visit. But most haven’t even considered visiting Italy at Christmastime – one of my favorite times of year to experience authentic Italy. I’ve had the pleasure of spending the holidays in Italy and can’t wait to go return again during the Christmas season.
Here are some ideas for where and how to celebrate Christmas in Italy. 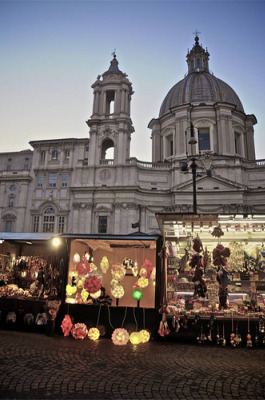 When you think of Christmas in Rome, you inevitably think about Christmas Eve at St. Peter’s Basilica in the Vatican. The image of the Pope celebrating Midnight Mass is relayed around the world via television. It is possible to get tickets to be inside the basilica for the mass but you have to plan way ahead. I helped travel planning clients get tickets to Midnight Mass, but made the request some eight months in advance in May. When my parents and I spent Christmas in Rome one year, we went to St. Peter’s Square just before midnight to watch the Pope on a big television screen and see the life-size nativity. Though we weren’t inside, it was still an incredible feeling to be there that night.
St. Peter’s isn’t the only game in town, so to speak, when it comes to Christmas Eve Mass. There’s a service at the Pantheon that features Gregorian chants. The 124 steps leading to Santa Maria in Ara Coeli at the top of Capitoline Hill are filled with candles on Christmas Eve. During the mass, the church’s venerated statue of Jesus is taken from the private chapel on a ceremonial throne before being unveiled and transported to a crèche (or presepio). You can even find a church where Midnight Mass is given in English.
Speaking of crèches, Italians – and Romans – are crazy for Nativity scenes (presepi). Between late November and the Epiphany (January 6), over a hundred go on display at Sale del Bramante in Piazza del Popolo. Some of the crèches date back to the 17th century and show the incredible craftsmanship of Neapolitan artists who carefully hand make the figures. Rome is also home to a museum devoted exclusively to the Nativity – Museo del Presepio. The museum, run by the Italian Association of Friends of the Nativity, contains over 3,000 Nativity figures from various regions of Italy and around the world.
And for a last Christmas in Rome tip, don’t miss the Christmas market in Piazza Navona – twinkling lights, candy and toys for sale and spotting of Babbo Natale (Santa Claus). 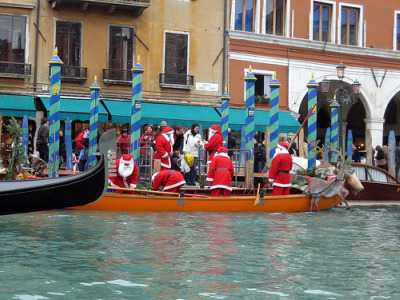 I think the most romantic time to visit Venice is in the winter – with the summer tourists a long way gone, you have more of the city to yourself, the sunlight hits the city in a unique way and the holiday lights are up in the calli (passageways). Each year, there’s usually a Christmas market – Natale di Laguna – held in Campo Stefano, but my source for all things Venice, Nan McElroy, reports that due to technical difficulties, it has been cancelled for 2009.
Nan recommends visiting the holiday mercatini (merchants) who appear all around the city, at San Bartolomeo just off the Rialto and up the Strada Nova, just to name a few. There’s also a celebration on the island of Murano – famous for its glass making – called Natale di Vetro (Christmas of glass).
If you’re planning to attend Midnight Mass at Venice’s most famous church, St. Mark’s Basilica, keep in mind that the mass actually starts at 10:30 p.m. Nan advises, “Do arrive earlier, as it’s heavily attended. Enter at the north entrance off the Piazzetta, and dress warmly: the Basilica can be drafty on a winter’s eve.” 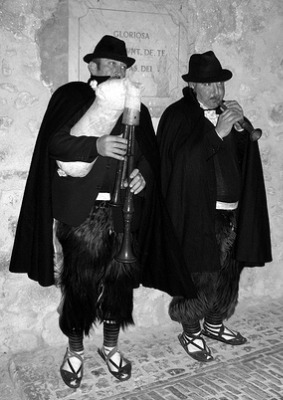 If you find yourself in the southern region of Puglia in early December, you might want to head to the town of Gargano. That’s when the zampognari, men who play the zampogne, an instrument similar to the bagpipes, travel to the town from Abruzzo or Basilicata. They arrive in groups of two or three, clad in their typical capes and regional costumes. The two “mystic” shepherds, one old and one young, surround a group of celebrating children, playing their allegre novene (joyful songs), and at night they gather in the Grotta dell’Arcangelo (Cave of the Archangel) to play traditional shepherd melodies.
My colleague Sharon Sanders recently told me about Il Presepe Vivente di Tricase, a living nativity that takes place each year in Tricase, a town almost at the tip of the Italian heel. About 250 locals work to put on the nativity pageant that has earned the town the name “The Bethlehem of Italy.” This free event is usually scheduled for December 25, 26, 27 and January 1, 4 and 6. 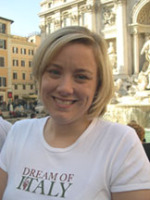 Kathy McCabe is the editor and publisher of the award-winning subscription, Dream of Italy. Dream of Italy has been recommended by USA TODAY, National Geographic Traveler, U.S. News and World Report, and more. For over seven years, McCabe has been bringing readers the best and most authentic experiences Italy has to offer, from cooking schools to villa rentals, walking tours to shopping for Italian crafts. McCabe, who has been to Italy more than two dozen times, and her contributors uncover the little-known that can’t be found in guidebooks.

Don’t miss Dream of Italy’s free 35-page guide to Christmas in Italy – it’s got travel tips, Italian holiday traditions, and Italian holiday recipes so you can incorporate a little bit of Italy into your seasonal celebrations.