If you’ve ever been traveling and had one of those “off” days, where the things you tried to plan didn’t quite work out and you’re feeling a bit discouraged, then all you need to set things right is a good day to follow it. Heck, even a good half-hour will do at that point. Well, after a not-so-fantastic start to my Venice visit on Tuesday, and a day spent running around for work on Wednesday, I found a restaurant on Wednesday night that treated me to such a great evening that it’s possible I’ll forget all the difficulties of the previous days.

Osteria al Mascaron in the Castello district is a short walk from Piazza San Marco, and it’s almost impossible to see through the glass doors at all for all the recommendation stickers that have been accumulating over the years. It’s been written about in books and frequented by locals and tourists alike. The osteria has occupied the same tiny spot for nearly 30 years – in May of this year, in fact, will be its 30th anniversary. The truth is that Osteria al Mascaron doesn’t need my recommendation any more than the city of Venice does – and yet I’m going to spend a bit of time telling you why you should try to spend an evening there.

Now, I’ll warn you that I’m told Al Mascaron is incredibly popular and very busy during much of the year – especially during the high season, you can probably expect lines. Having said that, you should still stroll by and see whether you can get a table, no matter what time of year you’re visiting. But if you’re lucky to visit Venice during the off-season, like I am, you should absolutely make a bee-line for this osteria. 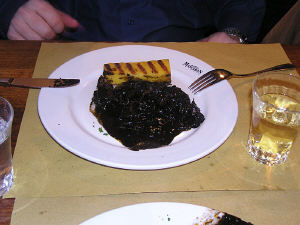 The house specialties are all somehow related to the water that surrounds Venice – there’s squid in the black ink-sauce (pictured at right) that’s classic Venetian cuisine, and some giant prawn-like things (which I discovered later are called “canoce,” sometimes known as “sea cicadas” or “sea mantis”), and baccalà, a thick and creamy spread made from salt cod. All are wonderful, and typical of Venetian cuisine in that it’s not about fancy ingredients or flashy flavors – the dishes are simple, thoughtfully prepared and beautifully presented.

But even if the steak is an afterthought on the menu, intended for those who don’t eat fish, it’s still great.

I have to mention the gentlemen who took care of me as I dined alone – they made me feel like I wasn’t actually dining alone at all. Stefano takes care of the dining room, welcoming everyone and making them feel at home. And Gigi is the co-owner, the man behind the counter who sings along with whatever CD is playing (from The Scorpions to Van Morrison to Four Non Blondes) and who kept passing tiny sampler plates to me over the top of the glass case so I could try some of the things I hadn’t ordered.

I’m no food critic, and I don’t have any aspirations to be. I’d like to think that if I were a restaurant critic I’d have the ability to eat silently by myself in the corner of a busy restaurant without making friends with the waitstaff. But I’ll admit that there are times when it’s tough to be traveling alone in one of the most romantic cities on earth, so having the company of Stefano and Gigi while I ate was a welcome alternative to my book. Of course, I know that by chatting with them about what I do I’m no longer an unbiased writer… And really, I don’t care.

See, there was a German couple sitting at the next table, and during their meal they produced a photocopied collection of pages from what turned out to be a book on Venice. Osteria al Mascaron is included in this book, and Stefano took it from them to read to Gigi. The German woman went back to the couple’s hotel to get the actual book, which was published 15 years ago and apparently had some amusing old pictures of the gang. The German tourists were neither food critics or travel writers, they were simply travelers who had returned to Venice several times and visited this same restaurant on each occasion because they loved the food. They took pictures of every plate before digging in, of each other enjoying their meals, and of the plates behind the counter as Gigi tended to them. They made friends with the staff and were offered sample tastes as well – and not because the folks at Al Mascaron thought they were going to get anything out of it, either.

What I’m trying to say here is that what I received is the same kind of treatment anyone who wants to be chatty and make friends will get. I’m certain of this. And that’s why I’m recommending this place so highly, without a guilty bone in my body.

UPDATE: And that is also why I went back on my last night in Venice for another magical evening.

Address: Calle Longa Santa Maria Formosa 5225, Venice
Hours: Closed Sundays
Specialties: Typical Venetian seafood dishes, including squid in black ink sauce (seppia nero) The pastas are all meant to be shared by two people, so bring a friend (or make one there).
More Information: tel: 041 522 5995
Cash only, no credit cards accepted – and some reports say that even locals claim the prices have inflated too much in recent years, so stop by a Bancomat before you go (prices are posted on the menu outside the door, so you can see for sure if you want to spend the money before you enter); reservations recommended, especially during the busy season
Chef’s website: https://www.giancarloseno.com/
Location: The restaurant is on the Calle Santa Maria Formosa, which connects with the Campo Santa Maria Formosa. It’s just about halfway between the large Campo and the Ponte Novo over the Rio San Severo. If you take the address of “Castello 5225” to the tourist office, they will be able to find it for you on a map.