Budget Airlines that Fly to Naples 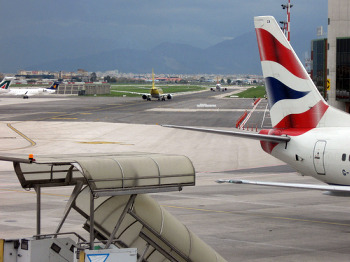 I’ve already covered the budget airlines that fly into Italy’s major cities, including Rome and Milan. But the truth is that if you’re employing the method of getting to Italy that involves flying into a different European country and then hopping on a budget flight to Italy, you’re no longer limited to Italy’s big international airports.
Which means that if you’re as hungry for authentic Italian pizza as I am right now, you’ll grab the first budget flight to Naples.
The Naples Airport may not be one of the main international gateways in Italy, but it’s still a big international airport serving a ginormous city. Even if you’re not enamored of Naples itself, it could be the perfect airport to fly into if you’re heading straight for the Amalfi Coast or other points in central Italy. Unlike some of the other big cities in Italy, however, Naples doesn’t have multiple airports within a stone’s throw of the city. Still, even though you’ve got one choice as far as flying into Naples, the Naples Airport does have several budget airlines that fly in and out regularly.
Before you get too excited about the idea of flying on a budget airline into Naples, be sure to educate yourself about what it takes to plan this kind of admittedly-more-complicated itinerary by reading my article about the budget airlines that fly to Italy. It includes information about what you need to consider before you book such a trip, so you’ll know whether the savings are really worth it.

Budget Airlines that Fly to Naples

As mentioned above, there’s one airport serving Naples – and it’s cleverly known as Naples Airport (airport code NAP), or Aeroporto di Napoli in Italian. It’s also sometimes referred to as the Naples Capodichino Airport, after the Capodichino district in which the airport itself is located. The airport is just over 3.5 miles from Naples and well-connected to the city via coach services and taxis (reports are that a Metro line is planned, but there’s no telling when that’ll happen).
The budget airlines that fly to Naples Airport in Naples are listed below, and some of the main cities from which they depart are listed after each airline name:

How to Fly Budget Airlines to Naples

I don’t think anyone would tell you that booking two separate flights – one to Europe and the other from Europe to Italy – is a logistical breeze. There’s definitely some extra work involved on your part, but if you’re up for that it could save you some big money. Just remember to consider what exactly that extra work is before you start booking flights, because you might just decide it’s easier to pay the extra money instead.
>> How to Fly Budget Airlines to Italy
photo by Reinout van Rees