Budget Airlines that Fly to Sicily 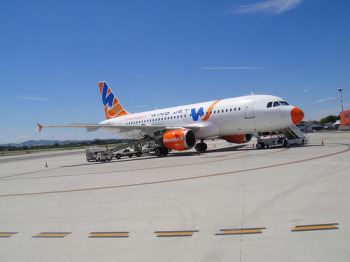 Generally speaking, if you’re flying to Italy from overseas you’ll be looking at flights into Rome or Milan. There are airports scattered all over the place in Italy, but those are the country’s two main international entry points – so that’s where you’re most likely to find the best prices on airfare.
But what if Rome and Milan aren’t on your itinerary? What if you’re going to Sicily and don’t want to waste your precious vacation time getting from Rome to the southern tip of the peninsula? Are you stuck flying into Rome anyway in order to not pay a fortune on a plane ticket?
The short answer is no. The long answer is the rest of this article.
As I noted in the article about flying on budget airlines to Italy, the cheapest flights to Europe aren’t usually the ones to Italy. They’re usually the ones to London or Amsterdam or Paris or Frankfurt. Which are all fine places, but they’re no Italy. So, if you’re looking to save some money on your airline ticket and get the bonus of a flight right into Sicily, then I suggest flying into the cheapest city in Europe you can find – and then hopping on a short flight on one of the budget airlines that flies to Sicily.
This “two-step” process of getting there usually means you’ll have to do a little more planning ahead of time, but saving money as well as time you’d otherwise spend on the train could well be worth it. In this article, you’ll find information about the airports in Sicily you might want to consider flying to. You just need to make sure you can find a flight on one of the budget airlines listed below from whatever your European entry point is. Again, read more about how to do this two-step process in my article about how to fly on budget airlines to Italy.
It’s also worth noting that even if you do fly directly into Italy, some distances are better covered by a short flight within the country rather than a long (and sometimes costlier) train ride. So this list of budget airlines flying into Sicily can be handy even if you aren’t having trouble finding a great deal into Italy in the first place.
>> More information in this Sicily travel guide

Budget Airlines that Fly to Sicily

There are several airports serving the island of Sicily, but there are three main ones you should look at when you’re thinking about flying into an airport in Sicily. There’s a fourth airport that’s just been converted from military to commercial use, and it’s not quite ready for prime-time yet. But reports indicate it’ll be another spot that budget carriers will want to add to their destinations list – Ryanair in particular has said they’d be interested in flying there. So I’ve listed it at the bottom and will update this article once it’s operational.

Although the city of Catania is the second biggest on Sicily, its airport is the island’s busiest. Like many airports in Italy, it has a couple names. In addition to “Catania-Fontanarossa” it also goes by “Catania-Vincenzo Bellini Airport,” after the Itlalian composer born in Catania. The smaller airline Wind Jet is based at the Catania Airport, so although it’s not a budget carrier it may offer some good deals on flights to its main hub. Meridiana also has a secondary hub at Catania.
The budget airlines that fly to Catania Airport are listed below, and some of the main cities from which they depart are listed after each airline name:

Palermo is Sicily’s biggest city, and home to its second busiest airport. Like Catania’s airport, Palermo’s has a few names – including Falcone-Borsellino Airport and Punta Raisi Airport. The airline Meridiana has a secondary hub at Palermo, so although it may not be a budget carrier it’s worth checking for lower prices.
The budget airlines that fly to Palermo Airport are listed below, and some of the main cities from which they depart are listed after each airline name:

If you’ve been paying attention, it will not surprise you in the least to learn that Trapani’s airport – the third major airport on Sicily – goes by a few names. Among them: Vincenzo Florio Airport and the simple Birgi Airport. It’s one part commercial airport and one part military airport, so don’t be surprised if you see military planes around as well. The list of airlines even serving Trapani is tiny – only two, as a matter of fact – but since one of them is Ryanair, you still stand a pretty good chance at finding a bargain fare.
The budget airlines that fly to Trapani Airport are listed below, and some of the main cities from which they depart are listed after each airline name:

This is the airport that’s just been converted from a military airport to one that will host commercial flights – but it hasn’t yet opened for business. Ryanair has said they’d be interested in connecting this airport with Charleroi in Belgium. In other words, it could become another airport with a few budget airlines to choose from. I’ll keep an eye on it, and will update this article when I find that it’s up and running. If you happen to find out it’s open for business, please let me know!
photo by francescomucio