Carnevale d’Ivrea and the Battle of the Oranges 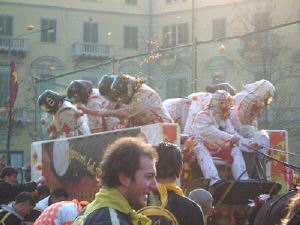 I say there’s nothing like a good food fight to make you feel like one of the locals, and the town of Ivrea in the North of Italy seems to agree. Every year in late February, residents of Ivrea take part in a carnival tradition which has been dubbed the “Battle of the Oranges” – and with good reason; for three consecutive days of the Carnevale d’Ivrea, they use oranges as weapons in a citrus-scented war in the city center.

But let me back up a bit.

Back in the 12th century, the then-duke of the area had instituted a “tradition” in which he was to be allowed to spend one night with each newly married woman in his domain. Clearly, some people just went along with this out of fear of reprisal, but legend says that one young woman called Violetta wasn’t about to sleep with the duke – and instead of just refusing him, she chopped off his head. Her act sparked a revolution in the town of the downtrodden against their oppressive rulers, and to this day she is remembered and revered as a symbol of freedom.

Fast-forward to the early 1800s, when the traditional carnival activities that each city district celebrated separately were combined into one city-wide celebration under Napoleon, who ruled the region at the time. After the area was returned to Italian rule, the Carnevale d’Ivrea continued as one big festival in the city, including all of the various districts at once. The townsfolk dressed up in period costume, as they still do today, and reenacted specific elements from the 12th century revolt. 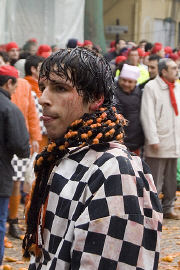 Characters in the reenactment include Violetta (called a Mugnaia, or miller’s daughter), a group of generals from Napoleon’s army, and the Deputy Chancellor, along with a marching band of pipers, drummers, and flag bearers. The entire Carnevale d’Ivrea lasts a week, ending just before Ash Wednesday with the famous orange fight, and including parades, music, and a gigantic bonfire.

But it is, understandably, the pelting of one another with oranges that piques the curiosity of most people.

Perhaps not surprisingly, the Battle of the Oranges is actually a relatively recent addition to the Carnevale d’Ivrea celebrations. The orange itself is meant to symbolize the decapitated duke’s head after Violetta lobbed it off, and apparently they used beans and apples before switching to oranges at some point in the early 20th century (the exact timeline of things is more than a little unclear). What is clear is that the townsfolk are divided into nine orange-throwing teams on foot and a few more teams which are above the crowd in carriages. The teams in the carriages, who all wear enormous helmets in addition to other protective gear, are meant to represent the army of the oppressive feudal overlords, while the participants on the ground are the ordinary citizens who are trying to rebel. The folks on the ground wear some protective gear, but no helmets. Everyone involved is in costume.

Now, while I personally don’t relish the idea of getting struck by a flying orange (those things are not soft and squishy, let me remind you), the Battle of the Oranges in Ivrea’s carnival has become a popular tourist attraction. If you want to go and actually take part in 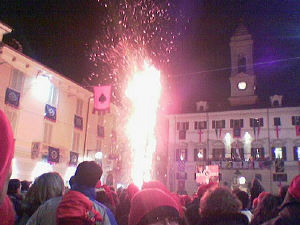 the orange-throwing, you can simply volunteer to join one of the nine teams on foot. If you want to go but not get oranges thrown at you, they say all you need to do is wear a red cap and you’ll be seen as a spectator and not a target. I’m sure they make every effort to abide by that, but I’m also sure there’s no guarantee you won’t get hit by orange shrapnel all the same, so dress accordingly.

And, in case you’re not completely bruised and bloodied by the oranges and you want to stick around, the Carnevale d’Ivrea ends with a ceremony in front of the town hall where they announce the winners of the orange battle (how the winners are determined, I have no earthly idea) and then light a spectacular bonfire in the piazza.

There are some great photo collections on Flickr from people who were brave enough to take their cameras into the thick of things – check out this one from Giò-S.p.o.t.s., and this fabulous one from maximolly that includes not only the orange battle but also parades, the post-battle bonfire, and the massive mess left behind by all those oranges.

And if you’d rather enjoy the spectacle from the comfort of your own living room and stay blissfully pulp-free, then check out these various videos of the crazy event.

This is a nice overview of the teams & a collection of photos from over the years.

This is just crazy orange throwing.

And just to give you an idea of the crowd sizes you’ll be dealing with if you decide to see it for yourself, check out this pre-battle gathering.

For more information, there are two websites claiming to be the official Carnevale d’Ivrea website – they’re both good, although this one has decidedly more information about the orange battle, what to expect, and tourism information if you want to check it out; and this one seems to focus more on what happens day by day throughout the week-long event. Both have great pictures of the various aspects of the festival and the orange battle. Ivrea’s official town website is here (in Italian).