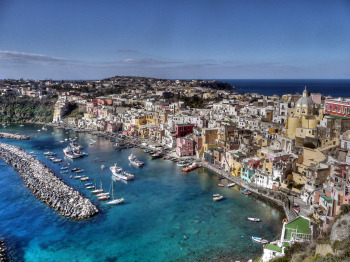 Whenever I read that people should use a town like Sorrento as their home base and include Naples only as a day-trip, I get a little uppity. Yes, Sorrento is pretty and arguably more clean and tourist-friendly than Naples, but Naples is so much more real – at least to me. The truth is that for some people a day-trip into Naples from Sorrento will be all they can handle – and that’s fine. For anyone looking to get to know Naples a little better, however, making Naples your home base and taking day trips to nearby towns and attractions is a wonderful alternative.
Having professed my love of Naples, however, I do think that getting out of the city for a day (or a couple, depending on how long you’re staying) is a good idea. One of Italy’s most visited attractions is a good day trip from Naples, and you don’t have to go very far to end up in a town that feels completely different from Naples – which is a good way to add variety to your trip. This is by no means an exhaustive list of the day trips from Naples, but it’s a list of the most popular ones. If there’s a day trip destination that you think should be on this list but isn’t, please leave a comment below!

Did you know you can book discounted shore excursions in Naples without going through the cruise line? And that they’ll guarantee to have you back at the ship in time for depature? Find out more: Discount Shore Excursions from Naples