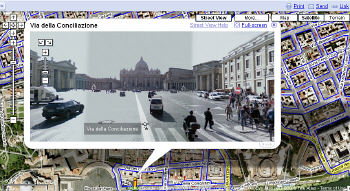 Ever since I first heard that Google’s ultra-cool (and, if I’m being totally honest, slightly creepy in its Big Brother-ish-ness) Street View was available for a few cities in France, I was jealous. Yes, I like France. I could even go so far as to say I love it. But I was greedy – I wanted Italy on the Google Street View map. Well, I’m pleased to say that my wish has finally been granted.

Google Street View is now available in Italy – in Rome, Florence, Milan, and Lake Como so far, though I imagine they’ll be adding more cities in the future (I’d love to see Venice and Naples, myself). But with as much time as I could conceivably spend just plopping that little yellow Google dude down in the various locations I’d like to be setting my own feet, perhaps it’s just as well that there are only a few Italian cities covered at the moment.

Still, I can already see who’s hanging out at what I still consider my corner bar in Milan (oh, how I miss you, Bar Fusina!):

I can bask in the neon glow outside my favorite gelato shop in Florence:

And I can take a break from it all with a quiet stroll through the Trastevere in Rome:

(When I started playing with the Italy Street View maps, I surprised myself by actually getting kind of choked up when I found the front door to the apartment building in Milan where the husband and I lived for six weeks earlier this year. Now, if that’s not a sign that I’m still pining for Italy, I don’t know what is.)

Google’s Street View for Italy is so much fun to play with, I defy you to get any work done for the rest of the day. I know I won’t be.