Hotels in Florence Near the Duomo 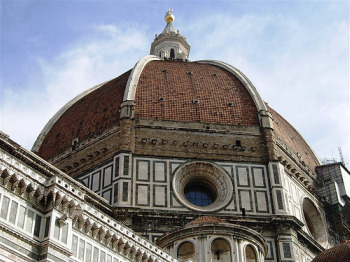 Most cities have one major landmark – the thing that, if you had your way, you’d open your hotel window and see every single morning. It’s the kind of iconic view that reminds you that you’re not in Kansas anymore, Toto. It’s the view every traveler craves when they check into a hotel and throw back the curtains for the first time.
In Florence, for most people, that view would include the city’s spectacularly beautiful Duomo. Now, getting a hotel in Florence with a view of the Duomo doesn’t come cheap – but if you can’t have the pretty cathedral right outside your window, the next best thing is to get a hotel that’s just a short walk away.
So in this article, I’m listing a few budget-friendly hotels near the Duomo in Florence. On the map below, you’ll find the Duomo marked with a red star in the middle of the map. Around it, there are blue icons – each one represents one of the budget hotels on my list. To get more information about any of the hotels, you can either click on the “More Information” link from each blue icon or you can scroll down to read a brief description and find a link for more details.
>> And if you’re looking for accommodations options that are even more budget-friendly, check out this article about hostels in Florence near the Duomo, too.

Budget Hotels in Florence Near the Duomo

Hotel la Gioconda
The Hotel la Gioconda is a short 100 meters from the square in front of the Duomo, and walking distance from all major sights in Florence. It’s a 3-star hotel on a street without much traffic that runs between the city’s main train station and the Duomo.
This hotel has something of a famous past. When the Mona Lisa was stolen from the Louvre in 1911, the Italian thief eventually checked into the Hotel la Gioconda in 1913 – two years later – with the painting, where he was apprehended and the painting was later returned to the museum. You can stay in the same room he used – Room #20.
There are 24 air-conditioned rooms (singles, doubles, triples), all with private bathrooms, breakfast is included, WiFi is available for a fee.
Hotel Giada
The Hotel Giada is situated close to not just the Duomo but also the Medici Chapel and the San Lorenzo markets in Florence. In fact, the hotel’s front door is on the street next to the San Lorenzo church where all those leather stands set up each day.
All rooms (singles, doubles, triples, quadruples) have private bathrooms, free internet access, discount available to a nearby fitness center.
Hotel Olimpia
The Hotel Olimpia is right on the Piazza della Repubblica, a few steps from the Duomo and one block from the busy pedestrian street Via dei Calzaiuoli. Some of the rooms have french doors opening on to small private balconies, giving you the ability to better enjoy the view you have.
There are 24 rooms (singles, doubles, triples, quadruples), all with private bathrooms, all with air-conditioning, free breakfast.
Relais il Campanile
The Relais il Campanile calls itself a B&B in Florence, and while they do say they serve a “rich breakfast” each morning (and in your room, no less) the cost is not included in the price of the room. It’s a cheap €5 per person, and it really does include much more than you’d get for the same price at most other hotels (not to mention cafes), but if you’re expecting free breakfast at this B&B, think again. The hotel is a few steps from the Duomo and all other major sights in the city.
All rooms (singles, doubles, triples) have private bathrooms, all are air-conditioned, free WiFi throughout the hotel.
>> Book Relais il Campanile in Florence
Hotel Strozzi Palace
The Hotel Strozzi Palace is one of the more expensive hotels on this list – and it’s not surprising, given that it’s a 4-star hotel. Still, it can be a good bargain if you’re visiting Florence in the low-season. The hotel is a few steps from the Duomo and other top sights in the city, and has lots of complimentary perks.
There are 18 air-conditioned rooms (doubles, doubles + sofa bed), all with private bathrooms, free WiFi throughout the hotel, free buffet breakfast.
Hotel de Lanzi
The Hotel de Lanzi is exceptionally close to the Duomo (you should be able to hear the Campanile bells easily) – it’s just to one side of the church, right on the Piazza del Duomo. Some of the rooms in this 3-star hoteldo overlook the cathedral, so if that’s high on your must-have list then make sure to request that when you book your stay.
There are 44 rooms, all air-conditioned, all with private bathrooms, free breakfast buffet, computer/internet access available in the lobby.
Hotel Bigallo
This 3-star hotel overlooks the Piazza del Duomo, and the price reflects that. For a hotel with such a great location, however, it’s still a good deal in the low season. When you’re booking your room, make sure to let them know if you want a room with a view of the cathedral (most rooms do have at least some Duomo view).
There are 17 rooms, all air-conditioned, all with private bathrooms, free breakfast, internet available for a fee.
Grand Hotel Cavour
The Grand Hotel Cavour – also known as the Albergo Cavour – is a 4-star hotel a few steps from the Duomo in Florence. The rooms are beautifully decorated with a combination of modern and older styles. There’s an on-site restaurant and even meeting rooms if you’re conducting business while in Florence.
There are 103 rooms, all with air-conditioning, all with private bathrooms, free (and extensive) breakfast buffet (if you book “room only,” breakfast is not included), WiFi/internet access available.

A Few Other Budget Hotels Near the Duomo

Some other budget-friendly places that aren’t marked on the map above, but that are still close to the Duomo and offer rooms at low rates, are: