How to Get from Italy to Greece (and Vice Versa) 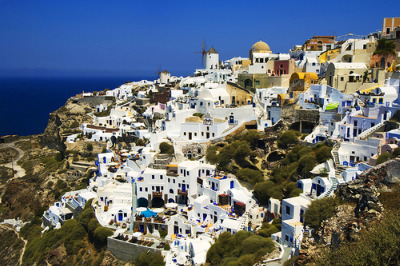 You’re reading this article because, for whatever crazy reason, you’ve decided that at some point you’ll want to leave Italy and go to Greece. I’ll try to refrain from commentary about why you should just stay in Italy because it’s got everything you could possibly want to see and do and eat and then some, because (much as I’d like to deny it) there are some great reasons to visit Greece, too. (Seriously, just look at the picture to the right and tell me you don’t want to go to Greece…)
Normally, when you think about getting from Point A to Point B you’ll come up with the same general options: planes, trains, and automobiles. But when you’re dealing with getting to Greece from Italy, you’re talking about two countries with copious amounts of coastline – so it’s not surprising that one of the most popular ways of getting between Italy and Greece is by boat.
Where you are in Italy could be one of the biggest factors in determining the best way to get to Greece, but cost and time are also big things to think about – so let’s look at your options for how to get from Italy to Greece, and then you can see which one fits your travel schedule and budget best.

Taking a Ferry from Italy to Greece 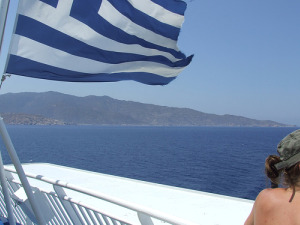 If you’re on the eastern coast of Italy and you want to go to Greece, the first thing you’d probably think of is taking a ferry. From the northern part of Italy, the trips aren’t going to be particularly short (heck, they’re not very short even from southern Italy), but if you’ve got time to spare it can be a bit of forced relaxation (something I’m not very good at while on vacation) – or you can take an overnight trip and wake up in a new country.
Ports in Italy that are departure points for Greece are Bari, Brindisi, Ancona, and Venice – but your choices don’t end there. There are a few different ports in Greece that you can sail to, and a few different ferry companies you can pick as well. Here’s an outline of the options (ferry company names are listed after the Greek destinations):

The prices for ferries are going to vary widely depending on your departure and arrival points, the duration of the trip, the kind of ticket you buy (deck only, seat only, dorm bed, or cabin), as well as the company you choose, so you’ll need to think about your own travel budget (not to mention your comfort level) in order to pick the ferry that’s right for you.
For instance, a ferry from Brindisi to Corfu for just a foot passenger (no vehicle), deck only, is roughly €40. On that same ferry, the price of a ticket for a seat is just under €50. From Ancona-Patras, a foot passenger with no reserved seat will cost between €50-55 (depending on the company), between €70-75 for a seat, and just under €100 for a bed in an on-board dormitory. On that same journey, for the best cabin possible, you’ll pay more than €250-280 per person (depending on the company).
Some ferry companies offer an option called “Camping on Board,” especially on the longer ferry trips, which is designed for people traveling with a camper or motorhome (and only available during better weather, usually April-October). This option lets you use the ship’s showers, bathrooms, and electricity for free – it just means that you’re staying in your camper during the trip, rather than taking a seat on the ship upstairs.
It’s also worth noting that if you’ve got a Eurail Pass, or even a more specific Italy-Greece Pass, the price of a ticket for a foot passenger (deck only) on overnight trips between Ancona or Bari in Italy and Patras in Greece is covered by using one day on your pass. Alternately, you can get a 30-50% discount on a basic cabin rate with your pass and not use a travel day on trips from Brindisi to Patras or Corfu.
Now, as for how fast these ferry trips are, remember what I said about them being for travelers with time to spare? Even the company called “Superfast” has to deal with the fact that they’re boats, not jet planes, so you’re still talking about a potentially long ferry journey. Looking again at the trips above for which I listed prices, the Brindisi-Corfu trip can run between 5-15 hours, and the quickest Ancona-Patras trip I could find is 21 hours long (and that’s on the “Superfast” ferry).
>> The options for taking ferries from Italy to Greece are quite complicated, so your best bet is probably to compare schedules and rates at this Greek ferry booking site – you can plug in your specific travel itinerary, dates and needs, and the system tells you what your ticket options are.
Those travelers with lots of time to travel are the ones more likely to think that a 21-hour ferry trip from Italy to Greece is a good option for a little under €100 for a dorm bed on board. Anyone with less vacation time to spare, and especially anyone near a major Italian airport, will likely find that flying is still the best option.
>> Further reading: Ferries in Greece

Flying from Italy to Greece 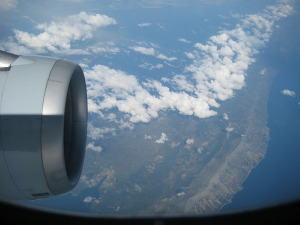 For most travelers, romantic notions of sailing the seas aside, the quickest (and sometimes cheapest) option for getting from Italy to Greece is going to be to fly. This is especially true if you’re close to a relatively major Italian airport, but even some of Italy’s smaller airports will have regular flights to Greece because the two countries are so close.
Flights from Milan to Athens, for instance, can be as cheap as €50-57 round-trip on budget air giant easyJet. One-way tickets are, as you’d guess, even cheaper – and Europe’s budget airlines often run crazy-sounding promotions where the base fare on specific routes (sometimes including Italy-Greece) is something like €1. Of course, they end up nickel-and-diming you to death with fees on everything else, so those crazy deals don’t usually end up being as great as they sound to begin with, but they’re always worth checking anyway.
A few of the points in Greece you might be flying to, and what Italian airports have flights to them, are listed below:

Taking the Train from Italy to Greece 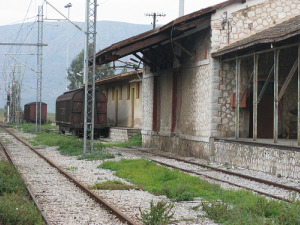 It’s possible I’m one of the biggest fans of European train travel – I’d still choose it 9 times out of 10, even if the flight was a little cheaper or even faster. I just love train travel in Europe. So when I say that taking the train from Italy to Greece is a bad idea, I hope you’ll listen to me.
All you need to do is look at a map of Europe to see that while Italy and Greece don’t lie that far apart as the crow flies, a train is not a crow – and as yet there’s no ocean-top rail lines with bullet trains zipping you from one side of the sea to the other. Taking a train from Italy to Greece would mean riding a train through Slovenia, Croatia, Bosnia-Hercegovina, Serbia, Montenegro, and then – finally – into Greece. And really, once you get to Greece, the usefulness of that country’s rail system (or lack thereof) will likely mean that you’re taking buses or ferries to the places you want to go.
In other words, unless your trip involves stopping along the way on a leisurely journey through each of the countries between the Italian and Greek borders, don’t take the train.

Driving from Italy to Greece 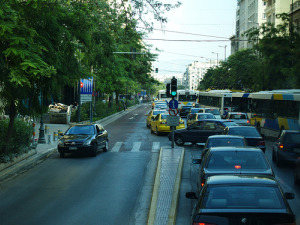 Just as taking the train from Italy to Greece requires several border crossings, so does driving. What driving to Greece from Italy also demands that the train does not, however, is your attention. This is a time-consuming trip, and one that’s going to add many miles to your car’s odometer.
Driving from Rome to Athens is a journey of roughly 2,400km, and if you were to drive straight through it’d still take you about 24 hours to make the trip. And, according to Michelin’s online route calculations, it’d also cost you more than €300 in tolls and gasoline (as of this writing). From Venice to Athens is roughly 1870km, a 20-hour trip, and costs more than €220. If you’re on an open-ended road trip and you’re planning to stop along the way wherever the mood strikes you (which sounds excellent, so please invite me on that trip when you go), the better option is probably either to fly (and rent a car in Greece if you like) or take a ferry (upon which you can take your car).
(It should be noted here that even Michelin’s online route designer defaults to having you drive to a port city in Italy to put your car on a ferry bound for Greece, so even a computer robot thinks driving all the way from Italy to Greece isn’t the best idea.)

And now that you’re in Greece…

Once you get to Greece, you’ll need as comprehensive and detailed a travel guide there as you’ve gotten here at WhyGo Italy. So where better to look than our Greece travel guide WhyGo Greece? Here are just a few of the things you’ll need to get started when planning your Greek trip: