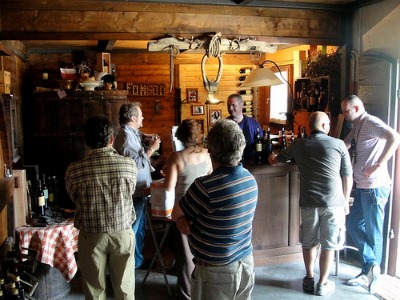 Italy is synonymous with many things, and one of them is great wines – and you really don’t have to be a serious wine snob to want to experience a little bit of Italy’s wine culture during a trip through the country. In Italy, wine isn’t meant to be something that’s only brought out on special occasions or even, in most cases, fawned over. This is a country where the house wine is often excellent while still being inexpensive, and where many people are making their own wine at home.
Regardless of how central wine is to most Italian meals, visiting Italian wineries remains more challenging than many visitors assume it will be. People who have traveled through the wine regions of countries like the U.S. and Australia might expect wineries to have tasting rooms with regular hours and several bottles open and ready to pour.
This, however, is not how things are in Italy.
Most Italian vineyards don’t have tasting rooms, and the ones that do often don’t have regular open hours. It’s getting easier to plan a self-guided tour of wineries in Italy by using the official wine tourism website – Movimento Turismo del Vino, or MTV – which lists vineyards by regions and provides information about whether it’s possible to visit them. Still, most people end up joining a guided tour of the area that includes stops at several wineries during a day. This has the added benefit of including a designated driver, of course. 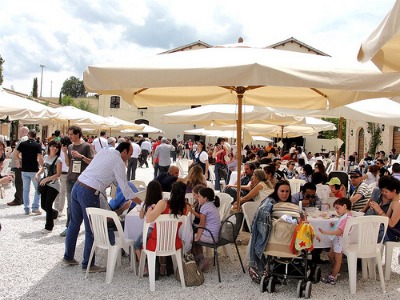 For those of you whose trips to Italy happen to include the last weekend in May, however, there’s a very easy way to get out to Italian wineries and their tasting rooms without joining a tour – and it’s called Cantine Aperte.
>> Cantine Aperte in 2012 is on May 27th.
“Cantine Aperte” means “Open Cellars,” and it’s a once-a-year event when wineries open their doors for visitors to come taste their wines. Not every winery in the country participates, but the list typically includes some that don’t have regular visitor hours during the rest of the year, so it can be quite a treat.
Cantine Aperte occurs on the last Sunday of every May, and in recent years the numbers have been staggering – for the 2010 event, more than 1 million people in total visited at least one (if not many) of the 800+ vineyards that opened their doors for the day. The spread at each winery will vary, but many take advantage of Cantine Aperte day to showcase not only their wines but also locally produced foods like cheese and olive oil (some of which they also make on-site) – so you may get to have a snack along with your wine.
Finding the wineries participating in Cantine Aperte that are near where you’ll be in the country is a process of a couple more steps than it could be, but at least the information’s all online (a major step for Italy). Here’s how to find what you need.

Because things can change from year to year and I wouldn’t be 100% confident that everything on the MTV website is up to date, I’d be sure to call or email any wineries you were thinking of visiting for Cantine Aperte just to make sure they’re open on that day and participating in the event. If you have time in a town before Cantine Aperte, you should also stop into the local tourism office to see if they have a special Cantine Aperte map for their area.
photos, top to bottom, by UmbriaLovers, UmbriaLovers