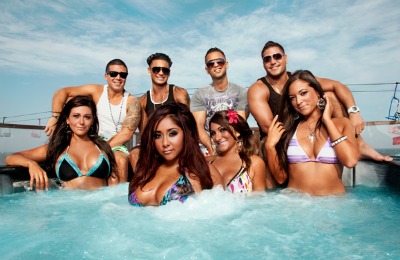 By now you’ve probably heard the news, that the Jersey Shore is set to begin filming on location in Italy in 2011 for its 4th season.
The exact spot where they’ll be filming hasn’t been announced yet, but no matter where the Jersey Shore cast and crew end up I thought I’d pass along a few pieces of Italy advice they might find useful.
Heaven only knows if the gang will do any pre-trip research, but I suspect we’d all agree they could all use it.

This is a broad statement, and applies to just about everything – most notably the food and language.
We’ve all heard the Americanized version of Italian words such as capisce (Italian for “you understand”), which turn into something that sounds like “capeesh” by the time they get across the Atlantic. There’s nothing wrong with using those words when you’re in an Italian community in the U.S. – if that’s what they’re using, that’s the local lingo. But in Italy, the Italian-American words you may be used to won’t necessarily be common or even understood. And the food? Italian-American “classics” like spaghetti and meatballs would be blasphemy in Italy, where pasta and meat courses are served separately.
I must admit I was surprised to see that at least one of the cast members is already anticipating a bit of culture shock, and – as he says – is thinking he “should get a Rosetta Stone or something.” I’m thrilled to see someone’s thinking ahead, although it remains to be seen whether being aware of the differences leads to being prepared for them.
For a little primer on what the Jersey Shore crew can expect, here’s some basic information on the Italian language and Italian food.

To a certain extent, the Jersey Shore cast will be insulated from some of the potential mishaps that normal travelers could run into simply because they’ll be surrounded by a camera crew (and, one assumes, handlers) all the time. But just in case they break free of the crew’s grip, here’s a bit of attire advice: simplify, simplify, simplify.
Yes, the jewelry and designer handbags look fabulous – and you might see some Italians dressing up in a similar fashion – but the truth is that any showy jewelry or bags, etc., make you a target for thieves. A watch can be slipped off your wrist faster than you can imagine, and you’ll never feel a thing. A purse can be snatched off your arm by someone on the back of a scooter speeding by you, and by the time you yell they’ll be long gone. (Ladies, if you won’t wear a cross-body purse to reduce the chances of having it grabbed, when you’re walking on the sidewalk at least wear your bag on the side that’s not right next to the street.)
This is sound advice for anyone visiting Italy, but in particular for the cast of the Jersey Shore – who are likely to stand out in a crowd already – it could save them from having to replace any of the accessories they bring with them.

We know the whole GTL thing – gym, tanning, laundry – is crucial to the Jersey Shore’s cast’s well-being, and it only makes sense that those things would be even more important when they’re out of their comfort zone. They’ll be thrilled to know, then, that the Italians have a high regard for all three of those things.
The Italian notion of “la bella figura” can mean making a good impression, but it also has the literal meaning of simply looking good. Italians don’t hesitate to tell you if they think you’ve gained weight, and they like staying fit. They may not all work out in gyms, but exercise and staying thin are important to most Italians. So, G? Check.
As anyone with pale skin will tell you, Italians have a tendency to assume you must be ill if you’re not tan. There are tanning booths in Italy, yes, but most Italians prefer to get their sun the old-fashioned way – on their beach holidays. Of course, many do maintain a tan through the winter, so obviously they’re not counting on beach time year-round. T? Also check.
Italians love to be fashionable, and they take care of their clothing – in particular, ironing is something of an art form in Italy. One major thing the Jersey Crew cast will have to get used to laundry-wise, however, is that clothes dryers are very uncommon in Italian households. Most people hang their clothes to dry year-round (which is part of the reason they iron everything), so if you want to wash jeans you’re planning to wear later in the week that takes some advance planning to make sure they’re dry in time. L? Mostly check.

What’s your advice for the Jersey Shore?

If you had the ear of the cast and crew before their upcoming Italy trip, what Italy advice would you give them? Leave it in the comments section below.
And don’t miss this hilarious rendition of what one Taiwanese animation company thinks the Jersey Shore could look like in Italy (found on the NY Times blog):

You can keep up with the Jersey Crew cast on Twitter as they embark on their Italian adventure – MTV created a Twitter list with all of their individual accounts.