Traveling by train in Italy has long been one of the easiest and cheapest ways of getting around the country (so long as you’re not sidelined by an unexpected transportation strike, that is), but Trenitalia, the national train system, has just introduced a long-awaited addition to the already efficient rail service with a new set of high-speed trains which run between key cities in Italy. Called the “Alta Velocità” trains, or “high speed” trains, this new fleet could save busy travelers lots of time – although it doesn’t come cheap.

Italy already has its own Eurostar trains, the Eurostar Italia, which is generally the fastest public transport method of getting from Point A to Point B throughout the country (and which should not be confused with the Eurostar trains connecting Paris and London). But now vacationers who have budgeted more money than time for their trip through Italy have another option. The new Alta Velocità can, for instance, get you from Milan to Rome in just 3½ hours with no stops along the way. With the next-fastest train, that journey would take you just over five hours – and the slower trains could take as much as six or eight hours. So the new Alta Velocità trains can definitely be a major time-saver.

Building the new Alta Velocità (or simply AV) rail lines was a big deal in Italy, as evidenced by the giant digital clock in front of Milan’s Central Station earlier in the year counting down the hours until the first of the new fleet of high speed trains was ready to go. Because the tracks themselves are actually slightly different from the existing tracks in Italy, creating the Alta Velocità network required not just building new train cars but also laying down new tracks. Honestly, that seems pretty inefficient to me, seeing as how there are miles and miles of tracks already on the ground all over the country, but as you can imagine the Italian train people didn’t contact me for input. So, we get what we get. 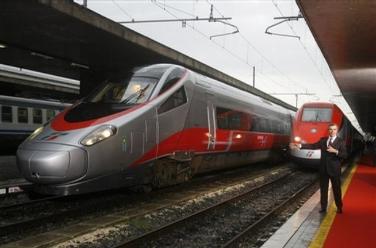 The first of the new Alta Velocità routes began running in mid-December 2008, connecting Milan, Bologna, Florence, Rome, and Naples. More cities (including Turin) are to be added as construction on the new tracks continues, and in addition to the Alta Velocità tracks they’re also introducing “speeded-up” Eurostar train service between several other cities to make the existing trips a little shorter. Some of the journey times you can expect are:

There are three levels, if you will, of Alta Velocità trains. The “Frecciarossa,” or “red arrow,” is the fastest, topping out at a speed of 300-350KPH. The others are the “Frecciargento” (“silver arrow,” maximum speed of 250-285KPH) and the “Frecciabianca” (“white arrow,” maximum speed of 220-230KPH). There are 1st and 2nd class options on all three train options, and every train has a cafe car. Like the Eurostar Italia trains, there are electrical outlets at every seat (in both 1st and 2nd class), but unlike the Eurostar Italia line the Alta Velocità trains also offer a “welcome drink” (with, as the website says, “the best Italian brands”) as well as chocolates to snack on and free newspapers to read. Then when you arrive at your destination, you’ll find easy connections with other transportation methods to get exactly where you need to go. 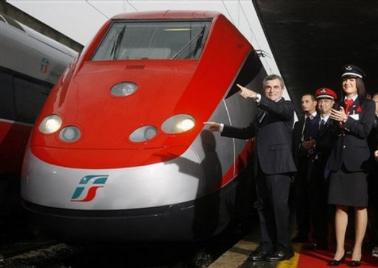 So, what does all this cost? It’s not cheap, that’s for sure. A standard 2nd class seat on a train between Rome and Milan will run you around €70 one-way, and a 1st class ticket will set you back more than €90 one-way. And the “flexi” tickets (which let you change trains without penalty) are even costlier – €111.70 for 1st class and €80.90 for 2nd class. But if you’re going to be in Italy during the first six months of the new Alta Velocità service, you can take advantage of some introductory sale prices. For example, you’ll get a 10% discount on the price of a ticket if you’re traveling through January 13, 2009 (the first month of the train’s service). Through the first six months of operation (so, probably through mid-June of 2009) you can get 35% off the highest ticket prices on a round-trip fare on the same day when the train trip is 3½ or more. And if you book online, you can get a 5% additional discount.

Obviously, the biggest appeal for the Alta Velocità trains is their speed, with their overall comfort being a big selling point as well. The target audience for these lines is primarily business travelers within Italy who are already making frequent trips back and forth between the political and financial capitals (Rome and Milan) via airplane and who might now choose to take the train because it’s about the same amount of time for less money. But if you’re a vacationer who’s on a strict timeline, has more money than time to play with in your travel budget, or just like the gadgetry of high-speed trains, the Alta Velocità lines are a perfect fit for you, too.

original photos #2 and #3 from here and here