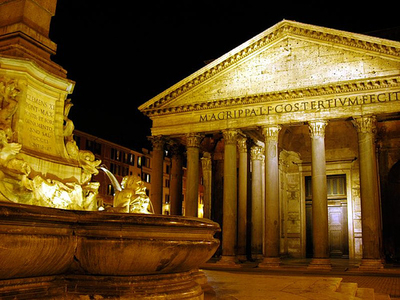 Visitors to Rome can’t be blamed for getting tired of “all the old stuff.” I mean, when you’re talking about a city with sights like the Colosseum and Roman Forum, it’s hard to not kind of glazed over when you try to contemplate how many people have walked where you’re walking. But I’m going to suggest that you try to shake yourself out of that for your visit to the Pantheon, because I think it’s just that cool.

Built in about 125 A.D., the Pantheon looks today as it has looked for, well, thousands of years. It’s the best preserved Roman building, and possibly the best preserved building of its era anywhere in the world. It has been in constant use since it was first built, which is no small feat. The name “Pantheon” means “all the gods,” reflecting the building’s original purpose – a temple to all the gods, which at the time meant the seven gods of the seven planets recognized in Ancient Rome. When Christianity became the new craze sweeping the nation, many temples were abandoned or demolished as churches to the new religion were built. But in what turned out to be a brilliant move, in 609 the Pope reconsecrated the Rome Pantheon as a Christian church, thereby ensuring its survival. The church’s official name is the Church of Mary and the Martyrs, but it’s almost always still referred to by its original name of Pantheon.

The building itself has been a source of wonder since it was first erected; during the Renaissance, no one could figure out how such an enormous dome could exist without interior support columns. In fact, Brunelleschi, the architect who eventually designed the dome for Florence’s famous cathedral was permitted to cut a hole in the Pantheon’s dome in order to solve the mystery. The answer to the puzzle is that the domed ceiling starts out very thick where it meets the walls and gets thinner and lighter as it goes up. At the very top, it’s largely made up of volcanic pumice stone. You can still see the hole Brunelleschi cut, just above the door on the inside. 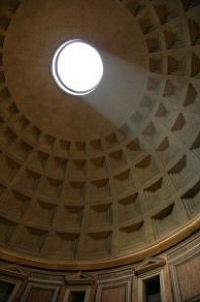 The hole at the very center of of the dome is called the oculus, or the Great Eye. When the building was still used as a temple to all the gods, fires inside the temple would create smoke plumes escaping out the center of the oculus. When you’re inside the Pantheon, you’ll notice that the oculus was and remains the only source of light for the entire structure. It’s also the building’s air conditioning system – air is pulled upwards through the oculus as more air is drawn in through the front doors. On hot days, the Rome Pantheon is blissfully cool and refreshing. And on rainy days, the front portico is affectionately known as “Rome’s umbrella” and you’ll find lots of people crowded under it for shelter. Of course, the oculus lets rain splash onto the floor inside, but if you stay away from the center you’ll be cool and dry.

One odd thing you might notice is that the Pantheon seems a bit sunken from the buildings around it, almost as if it’s too heavy for the land and it’s created an indentation in the pavement. What’s actually happened here is the same thing that led to the Roman Forum being reachable only by going down a flight of stairs today – Rome’s ground level has risen steadily over the years. Whereas the Roman Forum fell into disuse and was eventually buried beneath present-day Rome, the Pantheon remained in constant use and so was never covered. The ground around it, however, did rise – largely thanks to Roman refuse, I’m afraid to say – so today you’ll find yourself walking slightly at an uphill angle to get away from the Pantheon’s front door.

Walking into the Pantheon is, for me, a breathtaking experience. To think of the countless feet which have, over the past 2,000 years, walked exactly where I’m walking just gives me the chills. I know that the building has modern significance as well, especially as it’s where the famous painter Raphael, two of Italy’s kings and one queen are all buried. It’s also still an active Christian church where there are occasional services still held. But for me, the Pantheon is just a way to step back in time – almost literally – and feel history all around you. Do yourself a favor and let yourself be awed by it.

photo at the top by Silver Bromide