Save Money with Budget Airlines that Fly to Italy 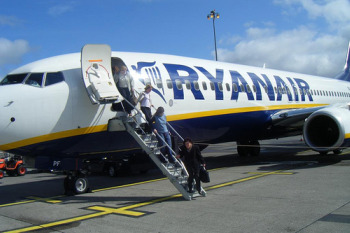 For years, one of the most frustrating things for Italy lovers who live in North America has been the high cost of airfare from even big hub departure points. I’ve never understood the reasoning behind it, but flights to Italy are routinely more expensive than flights to Paris, London, or even Amsterdam. So one of the tricks I learned from tour guides leading groups from North America to Italy is to book flights in two segments – one to get you from your North American airport to the cheapest entry point in Europe, and another to get you from that airport to Italy.
Now, this method might sound like it’s more of a hassle than it’s worth, but when you hear that you can sometimes save hundreds of dollars by booking your trip this way you might want to investigate further before you dismiss it entirely.

Use Budget Airlines that Fly to Italy

What makes this way of getting to Italy cheaper is the use of budget airlines in Europe for the second leg of your journey. You may have heard of these airlines – carriers like Ryanair and easyJet are some of the most famous, but there are many more besides those two. Many serve only certain regions of Europe, so some won’t work for a trip to Italy, but it’s relatively easy to find out which budget airlines fly to Italy and then choose from that ample list of options.
Another reason using this two-step tactic of getting to Italy is so clever is that it frees you up from having to fly into Italy’s big hub airports. Of course, if you’re headed to Rome, then you’ll be flying to Rome – but if you were only contemplating flying into Rome because it was the big international gateway and your real vacation starts in, say, a vacation rental in Tuscany, then you can skip the rigamarole of flying into Rome and then making your way to your Italy villa. Instead, you can choose to fly on one of those aforementioned discount airlines into what’s probably a smaller airport but that is much closer to your final destination. You’d have trouble negotiating that tricker itinerary if you were trying to do it all on one ticket, especially if you didn’t want to pay a fortune.
To help you plan your trip, here are some articles about European budget airlines that fly into specific Italian cities. Look for more cities to be added to this list over time.

How to Fly Budget Airlines to Italy

The first thing to do is find the cheapest fare you can from your home airport to a city in Europe – and then find the cheapest fare you can from that airport to the city where you want to end up in Italy. That’s when you need to start channeling your inner Type A planning personality.
There are a few things you need to keep in mind if you’re going to try to take advantage of the low fares offered by discount airlines flying to Italy – because you really don’t want to go from feeling all smug about saving big bucks on your ticket only to realize you didn’t plan well enough to actually make your connections.

So, is the hassle worth it?

The big question you may have after reading all this is, “Wow, isn’t it just easier to book a ticket all the way to Italy?” In some cases, the answer will be yes – it really depends on how much of a planner you are (or want to be), and how much money you could save by booking a flight on one of the budget airlines that fly to Italy from Europe.
If the savings are big enough, and if you have more time than money to play with, chances are you’ll figure out a way to make it work. If time is at a premium for you, and if you just don’t want to deal with all the “figuring,” then you’ll probably just book a ticket straight to Italy and be done with it. Budget travelers, however, are advised to at least consider this option as a money-saving measure.
photo by bigpresh