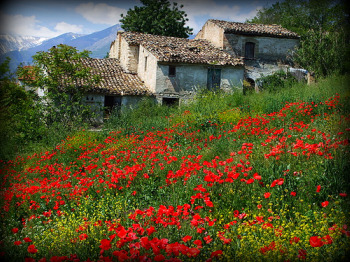 There are plenty of people who can’t quite stomach the idea of a winter trip to Italy – no matter how good the deals are – because they want at least a little bit of nice weather when they’re on vacation.
But those people would do well to avoid the knee-jerk reaction of assuming the best time to visit is in the summer. If you’re not forced into traveling only in the summer because that’s when the kids are out of school, then may I suggest you consider a trip to Italy in the spring?

I’m a big fan of the more moderate seasons in Italy – those being spring and autumn – even if the weather is a little more unpredictable. Both spring and fall have their perks, but in terms of the cost of a trip to Italy I feel like spring remains cheaper than fall (if only by a little) – especially if you’re talking about early spring.
Variable Weather
Whereas many parts of Italy are still downright cold (and often rainy) in February, by March you’re more likely to see more sunny days (even if you’re still wearing a coat) even in the northern parts of the country. If you head south, you’ll get even warmer weather – and as an added perk you’ll still see those famous Sicilian mandarins in all the markets, which are like candy they’re so sweet.
Potentially Better Deals than Fall
Depending on where you’re going, you might start seeing prices going up by April (this is more often true in the most popular destinations) – and by May you’ll probably feel lucky if you see anything other than high season prices. Again, however, in the less-visited areas you’re still more likely to see lower prices in May.
Your best bet for getting a great deal on your spring trip to Italy is to be keeping a close eye on the costs of airfare and hotel rooms months in advance. Sometimes those spectacularly low winter deals do include dates in the spring, so you can take advantage of the lowest prices without being stuck with a winter time trip.
Festivals & Holidays
There are festivals all over Italy in the spring months, including Easter (throughout Italy), VinItaly (Verona), Liberation Day (throughout Italy), and the Open Monuments Weekend (throughout Italy) – but even beyond the more well-known festivals there are local celebrations going on year-round, so be sure to check with the tourist information office in the cities you’re visiting to see what’s going on.
For More Information About Travel in Italy in the Spring

photo by villasfor2.com, enhanced by me in Picnik