In Venice, the city itself is the number one “sight.” But you would be remiss if you didn’t also visit one of the most beautiful churches in Italy (so says this author, anyway), located right on Venice’s main square: St. Mark’s Basilica, or Basilica di San Marco.
In this post, you’ll find information about how to avoid the long lines as well as some general information and visitor’s tips. 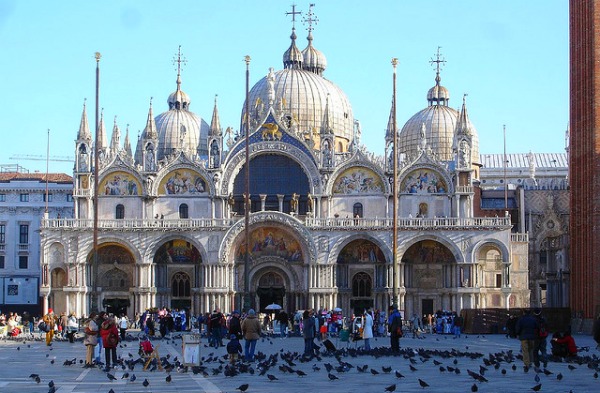 >> Many travelers to Venice want to stay near St. Mark’s, and I can’t say I blame them. If you’re one of them, check out these hotels around St. Mark’s Square.

It should be said at the outset that St. Mark’s Basilica is, perhaps, my favorite church on earth (at least that I’ve visited so far), so you’ll have to pardon my gushing. Despite what could be considered a bias toward this church, I can assure you that my affinity is well-placed, and Basilica di San Marco is a must-see while in Venice.
The structure which now stands proudly at the head of St. Mark’s Square dates from the 11th century, but it was built in the place of an older church, so there has been a church on this site for many hundreds of years. If you’re used to the straight lines and flying buttresses of Gothic-style churches, you’ll be cocking your head to one side as you stand in the Square and look at the many domes on the roof of St. Mark’s. No, it’s certainly not Gothic. But what is it? It’s Byzantine, bringing a bit of the East over to the West at a time when Venice was a major port and therefore a crossroads between the two worlds. As if to emphasize the city’s position as an important stop on the trade routes, the front of the Basilica is decorated with mis-matched columns which were all stolen from elsewhere and brought back to Venice as trophies.
The word “basilica” denotes the fact that a church houses the remains of a saint (or the partial remains, anyway), and in this case the saint in question is St. Mark, the patron saint of Venice. His bones were brought to Venice in the 9th century, stolen from Egypt and intended to increase the importance of Venice even more. It worked. Of course, the Venetian thieves probably thought they were just fulfilling destiny by making off with Mark’s remains – a legend of the time said that an angel had appeared to Mark in a vision, telling him he would be laid to rest in Venice. The same cannot be said, of course, for the columns, jewels, and other objects sea captains brought back to Venice over the years, but that is another matter. Originally a private church for the Doge’s (Venice’s rulers), Basilica di San Marco was only made public to ordinary Venetians in the early 1800s. 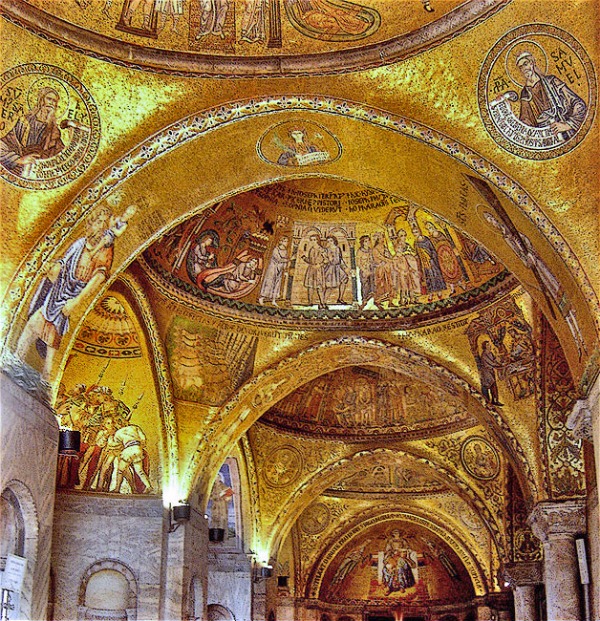 The Mosaics of St. Mark’s
St. Mark’s Basilica is probably best known for its mosaics. The floor, walls, and ceiling are covered with them (there are more than 40,000 square feet of mosaics inside), and they’re spectacular. Even the arches above the entries have notable mosaics, especially the one which depicts the delivery of St. Mark’s bones to Venice – complete with a representation of the Basilica itself in the background – which adorns the doorway at the far left of the church’s front.
The huge domed ceilings are largely done in gold, while the floor – too often overlooked – ripples with the years of Venice’s sinking. The route through the church is proscribed by astro-turf carpeting and many roped-off sections, but even if you are prohibited from walking in a certain place, the views are amazing. Any direction you look, you’ll see some of the finest Byzantine mosaics outside Constantinople (and if you like these, don’t miss Ravenna). 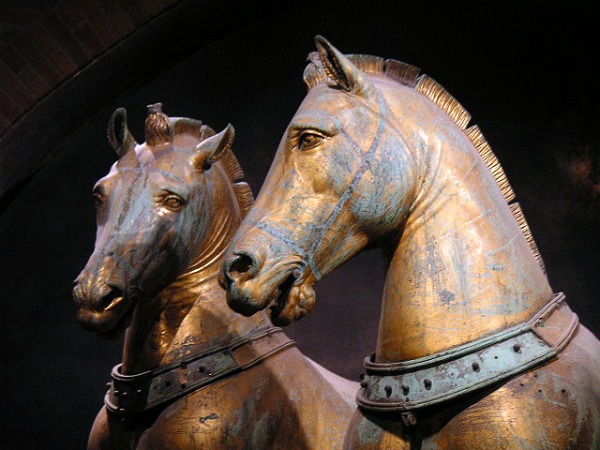 The Museums Inside St. Mark’s
Within the Basilica there are a few small museums (with separate entry fees) which might be worth your while.
The first is accessible from just inside the church’s front doors, but you can visit either at the beginning or end of your tour of the church. It’s a long and steep staircase up to the Galleria, but it affords you a sublime look over the interior of the church as well as an outdoor view of the Square below.
The originals of the four horses which stand over the doors of the church, which date from the 4th century B.C., are also in the museum. The original horses were stolen from Egypt by Nero and brought to Rome, then brought to Constantinople by Constantine, then to Venice by crusaders, then to Paris by Napoleon, and finally back to Venice when Napoleon was defeated. They were getting weather damaged on the Basilica’s roof, so copies were made in the 1900s and the precious originals brought inside.
The Treasury and Altarpiece are the other two separate entries within Basilica di San Marco. The Treasury (Tesoro) is where some of the Byzantine booty brought back from Constantinople by Venetians in the 13th century is on display.
Paying to see the lavishly decorated Altarpiece (Pala d’Oro) is worth it if you really like gold and precious jewels. Beneath the altar is where the body of St. Mark lies, and the altarpiece itself is laden with riches. It dates from the 10th century. If you are short on time and money, these last two mini-museums can be skipped without much of a guilty thought. 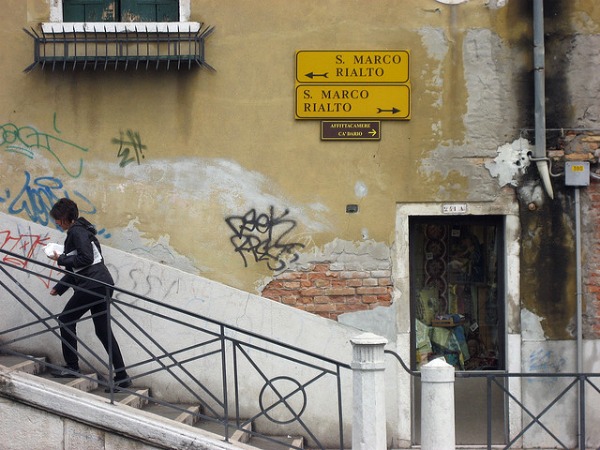 Like many churches, modest dress is required at St. Mark’s. This means no bare shoulders or knees on men, women or children. Backpacks or large purses are also not allowed, so leave your daypacks at your hotel/hostel, and bring only a small bag. No photographs are allowed inside. There is no admission fee (although there are museums within the church which require small fees to get in), but the lines can be very long. (See the tips listed below for avoiding the wait.)
Entry into St. Mark’s Basilica is strictly controlled by guards at the door, so that the church is never too crowded (although that could be a matter of some debate, since once you’re inside and elbow-to-elbow with other visitors) and no one gets in with backpacks or bare knees or shoulders. Do yourself and everyone behind you in line a favor and be prepared for entry when it’s your turn for inspection.
Unfortunately, the schedule for when the church’s incredible golden mosaics are lit is not set in stone, but if you can time your visit to coincide with the lights being on, the mosaics glow even more. Generally, the lights are on from about 11:30-12:30 on weekdays, and all day on weekends (all day because there are masses held during the day – when mass is going, so are the lights). A guided tour or written tour is recommended, so you can more fully understand what each mosaic means. Once upon a time, such decorations in churches were the way religion was communicated to illiterate masses – and now that the masses are literate, we can’t read the artwork. Go figure. 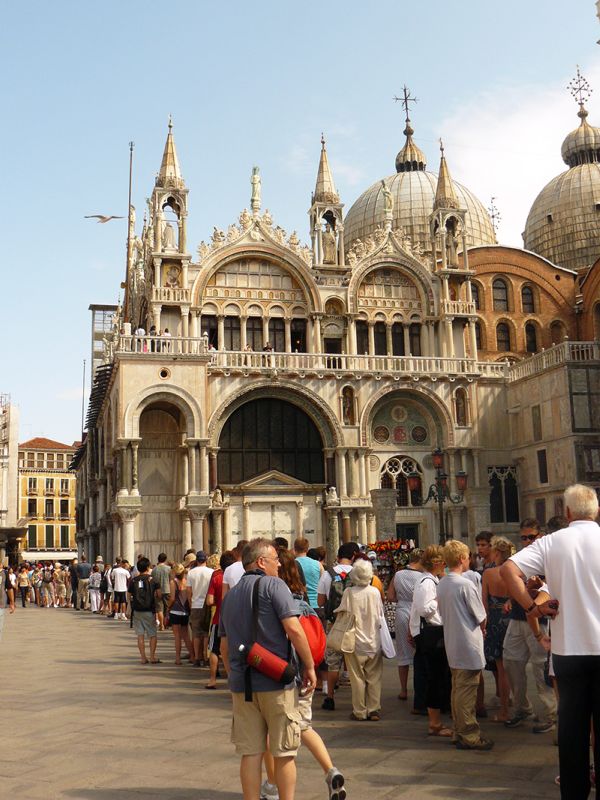 The lines to get into Basilica di San Marco can get very long during the peak season, but this is no reason to skip it. Being a smart traveler will help you avoid the lines entirely. Here are three ways to do that.