Staying in Convents and Monasteries in Italy 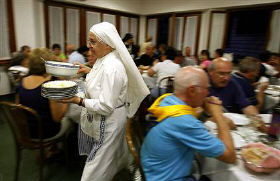 Staying in Italian convents or Italian monasteries instead of a hotel or even a hostel is an excellent budget accommodation option, but even beyond being a way to save money it also gives you a unique accommodation experience. While some of the monasteries and convents have stricter rules than an ordinary hotel or hostel would have, most people should have no trouble abiding by them.

Two of the more important things to keep in mind are that you don’t need to be Catholic to stay in convents or monasteries in Italy, and most of them have some kind of curfew. I’m not much of night-owl when I travel, and especially after a busy day of sightseeing I wouldn’t have any trouble being back in my room by the appointed time many of these properties require, but if you’re more of a party-goer that might be a problem for you. Also, some of the convents and monasteries in Italy will require that couples be married in order to stay in the same room, so be sure to check for that stipulation before you book.

Unfortunately, it’s a bit tougher to locate the Italy monasteries and convents that welcome travelers than you might think – they are, after all, houses of worship first and only provide accommodation as a second priority (if that). This is good news for anyone who’s looking to escape the crowds, because the fact that they can be harder to book means you’ll be only one of a few who’s spending the night. The bad news is that it means you’ll have to spend a bit more time doing research.

I hope I can help direct you more quickly to the resources I’ve found to be useful. Here are some articles about staying in monasteries in Italy or convents in Italy, both that I’ve written and that I’ve found elsewhere online:

And if, at the end of it all, this doesn’t sound like the best accommodation option for you, there are still plenty of budget hotels in Italy as well as hostels in Italy which you can choose from, not to mention the Italy agriturismo option. Don’t worry, you’ll find a place to lay your head at night!