How to Take the Malpensa Express into Milan 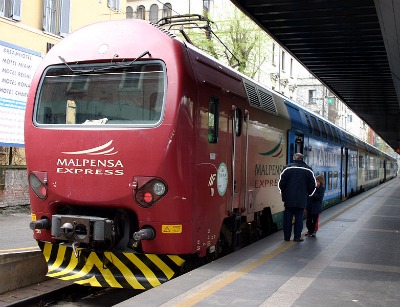 There are several ways to get back and forth between Malpensa Airport and central Milan, but my favorite is the Malpensa Express. The Malpensa Express is a train that runs from Malpensa Airport into the city with only a few stops en route. It leaves the airport every half-hour, and speeds your journey into the city. It’s reliable in terms of the amount of time it takes from point to point, because it doesn’t have to contend with traffic, which I like. Taking a bus from Malpensa to Milan is cheaper, but the Malpensa Express is far less expensive than a taxi ride and still what I’d call budget-friendly. 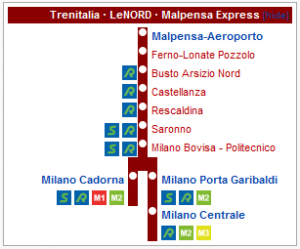 There are a few stops between Malpensa and central Milan, but unless you’re headed for Milano suburbia there are only two stations you’ll need to know about. Starting in late 2010, the Malpensa Express now serves two stations in central Milan – Cadorna and Centrale. This is excellent news for people like me who love the train, but because the trains don’t stop at both Cadorna and Centrale in one route, you need to know which trains go to which stations before you get on at Malpensa.

>> To find the most current timetable for the Malpensa Express, click on the PDF linked on this page under the heading “Scarica gli orari in vigore” that’s called “Linea Milano Cadorna/Milano Centrale – Malpensa Aeroporto.”

Ticket prices for the Malpensa Express are based on how far from the airport you’re going. Assuming you’re not stopping before central Milan in one of the suburbs, here are the stations you’re most likely to want to get to and how much tickets are for each one.

>> To find the most current ticket prices for the Malpensa Express, click on the PDF linked on this page under the heading “Tariffe” where it says “Scarica file.”

Finding the Malpensa Express inside Malpensa isn’t as straightforward as it could be, so here are some tips to get you from baggage claim to the train and on into Milan.

>> The official site of the Malpensa Express is here – be warned that some features, including looking up timetables on specific dates, only work if you leave the site in Italian rather than switching it to English.

photo by Giovanni Dall’Orto, graphic of train route on this Wikipedia page