The Chef Died in Venice 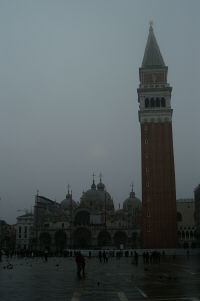 It’s a very good thing that Venice is exactly the kind of place you’d want to get lost, because it’s a bloody easy thing to do in this city. So, before I set out for dinner my first night back in Venice, I got out the three different city maps I brought with me. Overkill? Perhaps, but I’m really good at that kind of thing.

One of the maps is in a book which I’ve fallen in love with, called, “City Secrets: Florence, Venice & the Towns of Italy.” It’s not your typical guidebook, but is full of great little anecdotal recommendations for places to visit, eat and shop in cities all over the country. I had picked out a restaurant from the Venice listings, because this city is notorious for bad food – so it’s much safer to go with a recommendation than it is to just wander around and pick a restaurant at random. I’d chosen the restaurant closest to my hotel, just because I was tired and hungry – and the description sounded great.

I plotted my route on my maps, and even used the handy-dandy tracing paper provided in my Moleskine Venice City Notebook to draw it out completely. I left the hotel and carried the Moleskine open to the traced route, turning where my map indicated – even if there were no indications on the streets themselves that I should do so. See, in Venice, sometimes the streets on the maps have names while the streets in real life have no street signs – and other times the streets on the maps aren’t named while the streets in real life are marked. But regardless of whether there were any signs or labels on my map, I kept going.

Every time I thought I’d taken a wrong turn, I walked to the next corner and found that I was exactly where I was supposed to be. It felt like I just kept stumbling upon the right landmarks, although because I’d consulted three maps before I even left my hotel room it’s kind of hard to say I was “stumbling upon” anything. At any rate, I kept turning and turning, and eventually made the final turn onto the right street and found myself staring that awning of the restaurant I had set out to find. Amazing! Without making a single wrong turn, without a single false step, I had arrived exactly where I intended to – in Venice! That almost never happens, people. At least not to me. Unfortunately, my good luck was short-lived, because although I was standing in front of the right restaurant, it was completely dark.

Sadly, a sign in the window of the darkened restaurant announced that the chef, the reason for the restaurant’s recommendation in my City Secrets book in the first place, had died unexpectedly a mere four days before and the restaurant was closed until further notice.

So, I ended up like almost every other tourist in Venice, picking a restaurant at random (I hadn’t brought my trusty City Secrets book with me out of the hotel, and I was exhausted and too hungry to go back and get it) – and I, like almost every other tourist in Venice, chose badly. Still, there was one moment that made me smile. As I sat down and was moving to open my bottle of water, a waiter who was cleaning a nearby table came over to open it for me. It was sweet, if predictable – woman in touristy city dining solo, so the waiter comes over to rescue her, right? Well, it was nice, regardless. The funny part, however, was when he started walking away – he sang the title line from “Unforgettable,” that old Nat King Cole song. And then he sang that same line every time he walked by my table. I pretended not to notice, nose deep in my book. But I smiled on the inside.

The moral of this story, folks, is that even seasoned travelers who plan and plan and plan again can have things come up that make all those plans useless. And although in my book it’s always nicer to have a truly memorable meal in a memorable city like Venice, it’s never acceptable to go to bed hungry just because the restaurant you had in mind wasn’t open. The best course of action is to make the best of an imperfect situation and try again the next day. Which is what I planned to do as I sat in my cozy hotel room that night.