The book that spurred this original post back in April of 2007 is yet one more reason why I’ve come to love internet publishing so much. The book, “The Hungry Traveler: Italy,” was a spectacularly handy little pocket-sized book that I found back in 2001 before my first trip to the country. The book contained not only a mini-phrasebook for Italian menu words, it listed several regional specialties to be on the lookout for when visiting various parts of Italy. It was all you’d need to avoid the touristy menu-in-a-hundred-languages places and have a better shot at authentic and delicious Italian food.
And it’s now out of print.
There are occasionally used copies of “The Hungry Traveler: Italy” available on sites like Amazon or eBay, but they’re sometimes going for as much as $40 – and for some unknown reason, Amazon’s listing “new” copies (despite the book having been out of print for a few years now) at more than $100 a pop. All this for a book that cost $12 when I bought it new in 2001.
I’m leaving the original review of the book on this page, since it’s possible you’ll still find a used copy out there somewhere (and if you do, I highly recommend you snap it up!), but I’m also adding in another option – “Marling Menu Master for Italy” – that’s more readily available (AKA not out of print) even if it’s not my favorite. 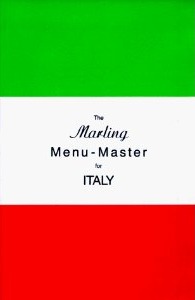 The “Marling Menu Master for Italy” is a small pocket (or purse) guide to eating out in Italy. It’s broken down by courses and types of food, with Italian words translated into English in each section. Even before that, however, there’s a helpful section in the introduction explaining some Italian dining etiquette and the different kinds of dining establishments in Italy, among other things.
One big thing that’s lacking in “Marling Menu Master for Italy” – and what I love most about “The Hungry Traveler: Italy” – is any indication of what dishes are specialties of what regions. It’s useful to have a menu decoder such as the one Marling has produced, but it’s even more useful to know what foods to look for on menus. Knowing what’s typical in a given region at a given time of year means you’re better-equipped to order the local specialties, which are generally the best things to order.
Of course, what “Marling Menu Master for Italy” lacks in regional specialty details, it very much makes up for in still being in print. As I write this, it’s available new on Amazon for less than $10.
>> Buy “Marling Menu Master for Italy” on Amazon 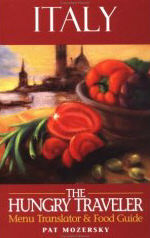 People who know me know that I enjoy good food. I consider a good meal a vacation experience worth spending money on, and have food memories from every holiday I’ve ever taken. So when friends have been planning trips to Italy, they usually ask me where to eat. While I don’t have a list of restaurants I’ve eaten in all over the country, I do have a personally tested method of ensuring I eat well in Italy. It’s a tiny book, about the size of a phrasebook, and it’s called The Hungry Traveler: Italy. And I don’t go to Italy without it.
What this little dining-in-Italy Bible gives you is a leg up over all the other tourists visiting the same cities you are. The ones who don’t know any better will flock to the restaurants which offer multi-lingual menus and familiar dishes. Many of them won’t care, as their idea of a holiday doesn’t involve spending two hours in a trattoria for lunch. If, on the other hand, you’re like me, you’ll love The Hungry Traveler. It breaks the country down by region, telling you what each region is famous for food-wise and also what’s in season when, so you know what to look for on menus. It also gives you a mini menu translator, so you can steer clear of the multi-lingual menus as well as the rest of the tourists.
Order what’s fresh, order what’s local, stay away from places catering to tourists and you’ll eat well anywhere on the planet. The Hungry Traveler: Italy will help you create food memories which can last a lifetime.