Tipping in Italy (or To Tip or Not to Tip: That is the Question) 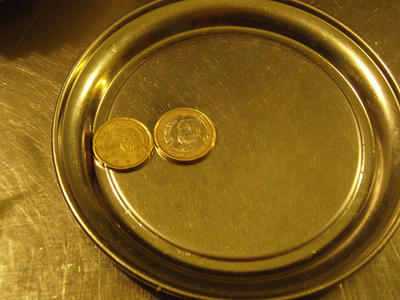 Seasoned travelers know that when dining out in a foreign restaurant, one of the biggest cultural conundrums is simply this: To tip or not to tip – what is the answer? Depending on where you go in the world, tipping your waiter can be anything from a kind but unnecessary gesture to customary to compulsory. So in Italy, which one is it?

In most sit-down restaurants, especially the nicer ones which have no counter service, you may find both “il coperto” and “servizio incluso” written on the menu. “Il coperto” is the cover charge, which is generally one or two Euro, and which takes care of things like bread before the meal and a glass of tap water. “Servizio incluso” means that service is included, meaning they’ve already figured in a tip for you – it’s usually around 15% – so the total due on your final bill is all you’ll owe. If the service has been particularly outstanding or you’ve had an exceptional experience, leaving a couple Euro on the table is a lovely gesture to let the waiter know.

A waiter in Italy isn’t the underpaid part-time employee you might expect a waiter to be (and as they often are in the U.S.), so a tip isn’t making up the difference between their salary and a living wage. Instead, the waitstaff in Italy not only makes a living wage to begin with, they also get government health benefits and probably more paid vacation time than you do.

But does that mean you should never tip in Italy? Not exactly.

Most of the time when you’re in a foreign place and you don’t know what to do in a given situation, your best bet is going to be following the lead of the locals. In Italy, when it comes to tipping, this still holds true. But what you’ll notice when you watch the Italians is that they will often leave a small coin or two as they leave the table, and even when they’re getting their morning coffee standing up at the bar. In some cases, I’ve seen people hand over a small coin as they’re ordering coffee at the bar (before they’ve even gotten their drink) – which, if you think about it, makes even more sense. Give the barista a small token before they serve you and you’ll get better service.

The idea of a “standard” tip of 15-20%, like most Americans are familiar with when they go out to eat, doesn’t exist in Italy. Italians don’t tip that much, even when they do leave a small token, and Italian waiters don’t expect that much. I know plenty of Italians who are actually annoyed when they see tourists leaving big tips, because they’re afraid the waiters will begin to expect it – thereby ruining it for the locals. (Francesca at Burnt by the Tuscan Sun, for instance, thinks you shouldn’t feel guilty about not tipping – ever.)

Still, if you feel like you just can’t get up from the table without leaving something, you can leave a few coins on the table before you go. Even if you’re paying with a credit card, don’t worry about putting a tip on the card – just a few spare coins on the table will do. And if you’re paying cash, you can just round up to the next euro and call that your tip if you’d like. (There are more specific tip amounts listed on Katie Parla’s site.)

This same rule applies with taxi drivers in Italy, too, by the way. A tip isn’t necessary and (in most cases) it’s not expected, but if you want to thank a driver for dealing with your heavy or plentiful luggage, or if you’ve had a nice chat, or whatever, you can just do a “keep the change” routine (in Italian, this is “tiene il resto,” pronounced tee|EH|neh eel RES|toh) to not get the leftover coins back from your euro notes.

I’ve heard of instances where a waiter in Italy has said to a customer (who clearly wasn’t Italian), “You can pay your bill at the register, but give tips directly to me” – assuming that a tip would be given. I’ve heard of taxi drivers in Rome being royally pissed off when they didn’t receive a tip. But the fact is that they didn’t historically get tips, especially from Italians, and the primary reason they’re expecting a tip now is decades of foreign visitors who tip generously – just like they do at home. If you want to avoid repeating the same mistakes of tourists past – and yet also avoid the irate waiter or cab driver – then meet somewhere in the middle and go with a small tip of a few spare coins. It’s more about the kind gesture than the money, really.

photo at top by Daquella manera