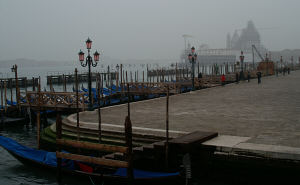 Flipping back through the little notebook I carried around Venice when I last visited, I found this:

After spending a day riding out to Torcello and back on the ACTV boats, even on the “solid” ground of Venice I can still feel the rocking of the water. I almost tipped over as I stood up in my hotel room. I’m taking that as a sign that Venice has gotten inside of me.

I’ve made no secret of my deep love for Venice, and am in turns both surprised and sad whenever I hear that people didn’t like their visit to the city. I understand why someone might not have a good time there, and yet even when I’m faced with some of the things people complain about – bad food, thick crowds, high prices – I’m able to accept all of those things as just the price I have to pay if I want to experience the good sides of Venice, too.

After my previous visits to Venice (all in the months of July or September), I wasn’t able to adequately explain what I loved about the city so much – I’d just gush to friends and family about how wonderful Venice is, without any concrete reasons why I felt that way. After this last visit, however, I think I’ve finally put my finger on it: Venice transports me. 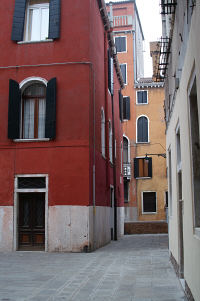 When I’m in Venice, I feel not just like I’m in a foreign country, but like I’m on another planet. Nothing seems to operate in Venice the way it does elsewhere, even elsewhere in Italy, and everything seems exotic. Simply turning down a few random (tiny) pathways in Venice can get you from crowded to deserted in minutes. And let me tell you – if stepping into a small, deserted piazza in Venice where you can’t even hear the hordes of tourists anymore doesn’t make you feel like the entire city has been emptied and it’s now yours and yours alone… I don’t know what will. Try that in any other tourist-infested city and you’ll be sorely disappointed. Venice is different. Venice is special.

I’ve heard Venice described (by the husband, among other people) as an “amusement park for adults,” and I think that’s certainly part of its appeal. It makes sense that this is the city where debauchery flourished in the form of Carnevale, where nobles and commoners could hide their identities for a few days each year and mingle (often in the most intimate of ways). Obviously, that’s taking the term “amusement park” to different places than I think most people mean it nowadays, but there’s still something of that old hedonistic quality in the modern-day Venetian air.

Venice isn’t known for its stellar nightlife (restaurants close up shop by midnight, if not earlier, even in the high season), but rather than that being seen as a bad thing, I feel like it’s one of Venice’s perks. It means that, if you’re not a night-owl, you don’t need to stay up until two or three in the morning to have the city to yourself. In fact, if you get off the tourist path, you can wander in the dark in what feels like an abandoned city by around 11:00 or 12:00 at night. And that, I’d wager, is a much more romantic experience than taking a gondola ride with hundreds of other tourists gawking at you from the bridges. 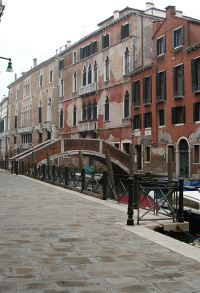 Now, combine that eerie deserted street or piazza or canal with darkness and fog, and you’ve got something even more than simply “transporting” – you’ve got “sinister.” But I mean that in a good way, believe it or not. It’s like a really good thriller you’ve seen or read, only this time you’re actually in it. And you don’t feel any sense of danger, you just feel the thrill. It’s the kind of thing that gets your heart racing, but instead of screaming all you want to do is smile.

That’s what I felt during my last visit – it was the last week of February, and the city was socked in with fog almost my entire trip (day and night). Even the Piazza San Marco was virtually deserted by 11:00pm, and by 4:00pm you could already barely see across the Grand Canal. Venice felt small to me then, and it felt like it was all mine. And even though I know Venice isn’t exactly the monogamous type, it feels quite amazing to think that you’re the only person in a city like that, even if it’s just for a moment.

What began as infatuation many years ago turned into love during my last trip, and no matter what Venice does to disappoint me in the future, as she most certainly will, I’ll always love her.

>> If you want to give Venice a chance to show her best side to you, too, then be sure to follow my instructions about what you have to do in Venice.