Why I Love Moleskine City Notebooks 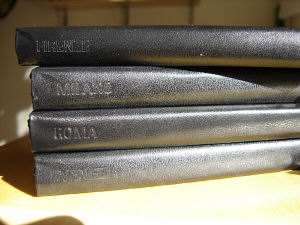 When I was planning my last trip to Italy, I’d already heard about the Moleskine City Notebooks – and in fact I already had the one for Milan, the city where I was going to be based. But when I first heard about these little gems, they didn’t yet have many cities covered. By the time I arrived in Milan and found out that Moleskine was headquartered in Milan, I contacted someone there and had three more Moleskine City Notebooks sitting on my desk the very next day. I had been sent the notebooks for Rome, Venice and Florence, three cities I was planning to visit during my stay, so it worked out perfectly.

At first, I wasn’t totally clear how I’d use my City Notebooks. They’re perfectly sized to fit in most purses (even the smaller travel-sized ones) or jacket pockets, so I carried my Milan book with me everywhere during my first week back in Italy. I used the maps to mark a few of the locations of restaurants and gelato shops I tried, but I kept forgetting about the book in my purse until after I’d left the location I wanted to remember. Clearly I was going to have to get more used to the thing.

And, as an aside, the names of the cities are stamped on the spine of each book but are really hard to read (as you can see in the photo at the top of this post), so with four of them in a pile I was in danger of constantly grabbing the wrong one. I’ve seen some people put stickers on the fronts or spines of the books with the names in more easy-to-read format, which I think makes sense. Perhaps in a future incarnation Moleskine will consider doing something like this themselves. 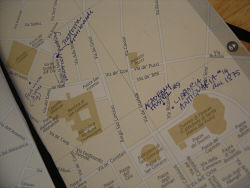 My first stop outside Milan was Venice, and I dutifully carried my Venice City Notebook with me. In a couple of instances, the sticky-note tracing paper sheets in the back of the notebook came in handy – I mapped out my routes to a restaurant or hostel on the tracing paper laid over the maps in the book, and was able to find my way there and back again with very little trouble.

Here’s where I have to digress for a moment and say that the reason I used the tracing paper instead of just marking the route on the map itself is one of the reasons I grappled with how to use these City Notebooks in the first place – I didn’t want to mess them up. It’s silly, I know, because they’re meant to be scribbled in, drawn on, and otherwise personalized, but they look so damned pristine when they’re new, and I really had to psych myself up for treating them the way they’re meant to be treated. 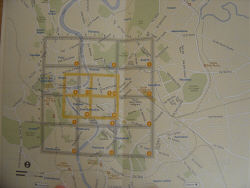 In any case, it’s for this reason that it took me awhile to really come to love the Moleskine City Notebooks and use them even halfway decently. My Venice notebook has a few notes in it, mainly dots on the maps to help me find hotels I was visiting or restaurants I wanted to try, but it wasn’t until later trips to Rome and Florence (not to mention several more weeks spent in Milan) that I started to completely fall in love with these little black books.

Eventually, I stopped carrying that extra blank Moleskine notebook around and just used the blank pages inside the City Notebook for whatever I needed to write down. I can now flip back through my notebooks for Rome, Florence and especially Milan and remember churches I visited, gelato I ate, shops I browsed through, bars where I had coffee, and restaurants I’ll want to return to someday. And there’s still plenty of room in all four of my Italy Moleskine City Notebooks, so I’ll be bringing them back with me on future trips – to make additional notes on old favorite haunts and to add new ones to the list. 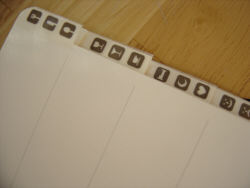 In the end, I’m a convert to the Moleskine City Notebook. It won’t replace a guidebook if you’re visiting a place for the first time, but if you’ve been there before or if your preferred mode of travel involves avoiding any place mentioned in a guidebook, then I’d recommend picking up a City Notebook for any city you’re visiting. Then, the next time someone says, “I’m going to Florence this summer, have you been there?” You can smile, pull out your City Notebook, and proceed to deliver the best travel advice a friend can give – the personal kind.

What Cities Are Available: You’ll find a list of both the cities currently available and the ones which should be out soon on the Moleskine City Notebook site. The Italian cities available as I’m writing this are still the four I used – Florence, Milan, Rome, and Venice.
Where You Can Buy Them: Check your local bookstore – if they carry Moleskine products, chances are they’ll have at least some of them. The travel section of larger bookstores is a good place to check (my personal hometown favorite is Powell’s). And if you’re really having trouble, this is where Moleskine says you can find their products.
City Notebook Key Features: Moleskine says that every notebook has 228 pages, up to 44 of which are color (these are the maps in the front, including a fold-out overview map of the city and then more detailed maps after). Past the maps, there are lots of completely blank pages awaiting your inspiration, and then several tabbed sections for things like food discoveries, hotels and hostels, sights and attractions, or whatever else you want to jot down. (The descriptions of what each tab is for are a little obtuse, so I just made up my own meanings for them.) There are some tabbed sections without labels, and a sheet of stickers you can attach to those – both pre-printed and blank – to create special sections that are important to you. There’s a small pocket in the inside back cover which is great for holding business cards or ticket stubs, and a few pieces of tracing paper with a reusable sticky end so you can place them over the maps and trace out the route of a walking tour or directions for getting from your hotel to that restaurant the concierge recommended. There are also a few pages which are perforated into squares (eight per page), each of which has the name of the city printed at the bottom. I’ve no clue whatsoever what these are for. If someone has a brilliant idea for how to use those, I’d love to hear it.