Those of you who’ve been following along here at WhyGo Italy no doubt remember my newfound love of Italian soccer. (The fact that the players themselves are more than a little easy on the eyes doesn’t hurt, but I really do love the game, too. Seriously, I do.) But before soccer, the sport I cared most about happens to be another popular one in Italy – cycling. People who aren’t into cycling may know nothing more about the sport than the words “Tour de France” and “Lance Armstrong,” but I’m here to tell you that Italy has its own epic three-week race – and the 2009 route has just been announced. What’s more, 7-time Tour de France winner Lance Armstrong himself is coming out of retirement and will be racing in Italy’s big event. As if you needed another reason to be planning your trip to Italy…

Italy’s big race, its three-week stage race that is essentially the Italian equivalent to the Tour de France, is called the Giro d’Italia – literally, the Tour of Italy – and it’s held each year in May. The May 2009 edition will be the 100th anniversary of the Giro, and the recently announced route includes some of the most famous places in Italy. The race start changes every year, but this time the first stage will be in Venice on the Lido. And although the traditional finish of the race has been in Milan for years, this route ends in the capital city of Rome.

Other cities which will see either stage starts or finishes in May 2009 are Trieste, Padova, Bologna, Florence, Milan, Turin, Bergamo, Naples, and Riomaggiore in the Cinque Terre. In fact, two of the most talked-about stages will be a time-trial through the Cinque Terre and a mountain finish on the famed Mt. Vesuvius. As if the incredible route wasn’t intriguing enough for fans of either Italy or cycling (or both), the fact that Armstrong will be making his Giro d’Italia debut in 2009 – after a 3-year hiatus from cycling, no less – is enough to make sports fans salivate.

(And, as an aside, as if the unveiling of the race route marking the 100th anniversary of the event wasn’t dramatic enough, they held it in the Teatre la Fenice in Venice. Yeah, the Giro organizers know a thing or two about drama.)

May in Italy is already a great time to visit, with generally excellent weather and crowd density that’s not as thick as in the summer months of July and August. But the added appeal of seeing a stage or two of this incredible bike race should just up the ante a bit. Keep in mind, whether you’re traveling to Italy to see the Giro or not, hotels and Italy hostels in the cities along the route will be snapped up early by spectators – and the rooms that are left will have every reason to jack up their prices. And especially if you think the hotel prices in Venice were bad already (they were), you’ll be even more hard-pressed to find cheap hotels in Venice just before the Giro start. So check out the route and the dates, and adjust your trip accordingly. You’ll find both a map and a list of the start & finish cities below.

And by the way, I’ve got plans to make a list of the hottest Italian cyclists (just as I did for soccer players), because some of the boys in the spandex shorts are well worth adoration. In fact, long before AC Milan‘s Andrea Pirlo held the title of My Boyfriend, Italian cyclist Ivan Basso was my guy. So, keep an eye out for that cyclists post – it may just convert some of you to becoming cycling fans! 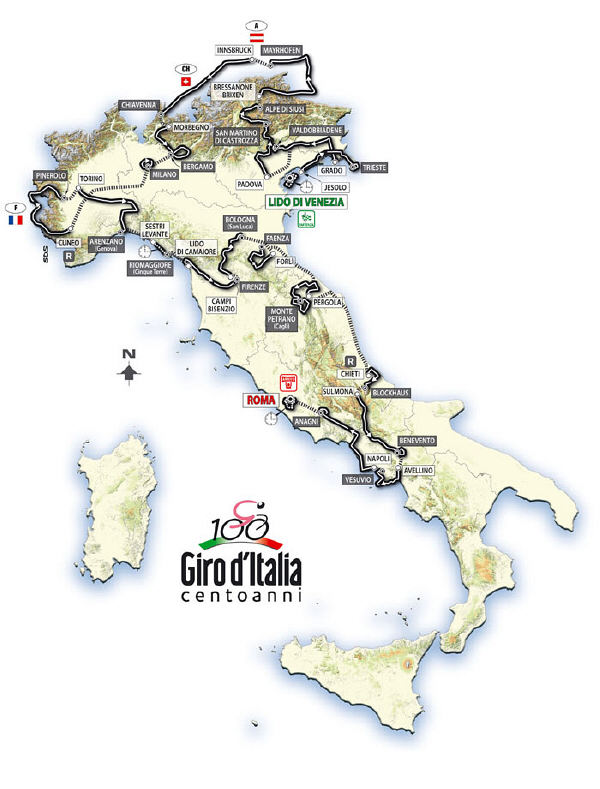 for more about the Giro route for 2009, including maps and profiles for each stage, see steephill.tv – and you’ll find official race coverage at La Gazzetta dello Sport’s website