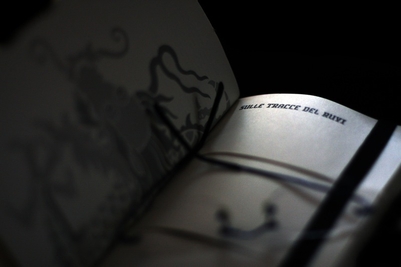 I’ll admit I’m not much of a games person. I have an insatiable desire to win, so simply playing isn’t enough fun for me. But I do like puzzles, and I like games that are collaborative. So when I first heard about the whaiwhai series of puzzle-solving games in Italian cities, I knew I wanted to learn more.

The tagline for whaiwhai (a Maori word meaning “to search for”) is “play the storyline through the city,” and it’s an interactive game designed to lead you through any of the cities the creators have covered so far. You’ll look for clues based on a combination of SMS messages you receive and information in the gamebook you have in front of you for that city.

The whaiwhai game is, as they say on their website, “a treasure hunt.” It feels like it’s part scavenger hunt, part Myst, and part Dan Brown-esque race against time. I say “feels like” because although I’ve been flipping through one of the gamebooks for a week or so, I haven’t played the game. To do that, I’d need to be in Italy. So there will likely be a follow-up post at some point after I’ve finally had a chance to play a whaiwhai game… But until then, I wanted to pass the information on to you so you could play. 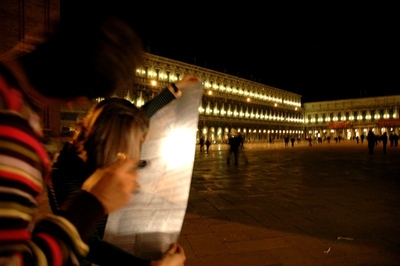 So far, whaiwhai has games set up for Venice, Rome, Florence, and Verona – with cities like London, Paris, Barcelona, New York, Prague, Berlin, San Francisco, Beijing, and Tokyo coming soon. I got a copy of the Venice book so I could write this post, and I’m told by the whaiwhai people that since Venice was the first of the series that the other books (and future printings of the Venice book) will look slightly different, although the game inside will be the same. The cost of playing the game is the cost of the gamebook (€27) plus whatever you ordinarily pay for SMS messages.

Here’s how you start – you buy a gamebook for the city of your choice. Each page in the book is split into thirds, and each partial-page has a piece of the story on it. The pieces often start and stop mid-sentence, and the stories contained in the book are completely jumbled up, so they’re basically unintelligible on their own. Without being told the proper order in which to read the story snippets, the thing might as well be in Greek. (Assuming you don’t speak Greek.) 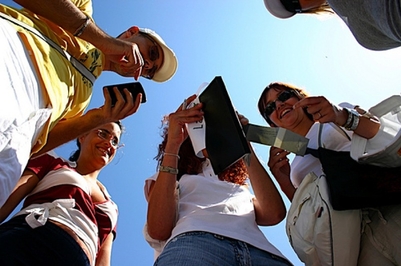 In order to make sense of the story in each gamebook, you’ll need help. That help comes in the form of SMS messages you’ll send and receive to the whaiwhai system. Once you’re in the city you’re playing in, you send an SMS message (that’s a text message to those of us in the U.S.) to the number listed in the introduction. There’s a unique numerical code in the back of each gamebook which you’ll plug into the SMS you send. The setup instructions in the introduction are very clear, so even though I haven’t yet been able to execute them I’m sure I’d have no trouble doing so.

Once you’ve sent off your SMS and told the system how long you want to play (there are a few options), you’ll start receiving SMS messages that help you get started. You’ll be led around the city by the SMS messages, which refer you to not only actual points in that city but also to certain pages in your gamebook. So in the end, it’s the combination of the gamebook clues, the SMS clues, and clues from the city itself that help you solve the puzzle.

whaiwhai is an interactive story that will lead you to explore a city in a new and exciting way. Prepare yourself to look for clues and discover hidden places: whaiwhai is a treasure hunt.

As you play, you’ll discover original, exciting aspects of the city you’re visiting. You’ll learn about ancient tales that will guide you on a path full of mysteries and legends. You’ll have puzzles to solve and clues to follow in order to reach your goal.

Each city has a different treasure, and finding it will be an exciting experience. Whaiwhai combines history and fantasy: you’ll step into the script of a story that plays out inside the city and you’ll even get the chance to become one of its heroes. 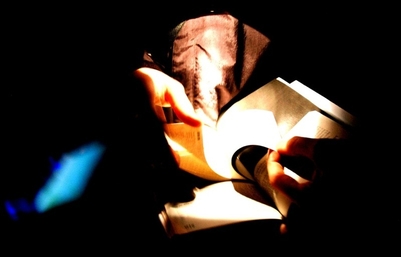 I should tell you that the prologue of the gamebook (the only part that’s readable without SMS clues) tells you what you’re hunting for and why; in the Venice book, it’s an ancient magic sceptre and Marco Polo’s tomb. So there’s obviously some fantasy involved, but in playing the whaiwhai game you’ll also be learning a little about the city’s history. Not to mention being taken on quite the ride around the place, seeing parts of the city you probably would never have found otherwise.

Particularly fantastic about the whaiwhai games is that you can play them multiple times. Each gamebook can be used three times (more if you go to the website to buy another code number), and there’s even a setting where you can play against another person or team in a race to the finish. The whole thing has the puzzle-lover in me fascinated and itching to get back to Venice so I can play.

The Venice & Rome games are both called “The Ruyi.” Here’s the Venice gamebook’s prologue in video format:

The Verona game is called “Amor:”